First seeds in, sown in the command centre which is our garage & potting bench. 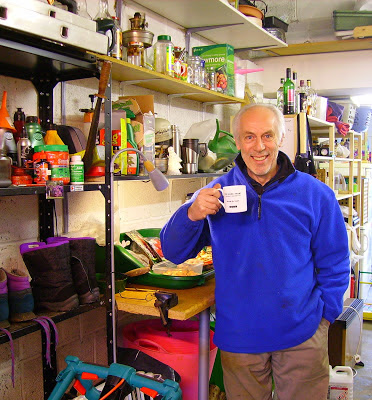 A couple of varieties of Tomato (Gardener's Delight and Pomona - an F1 hybrid from Seeds of Italy).  They are in a heated propagator in the greenhouse because......I've now got electricity in there, courtesy of a long and "outdoor-ised" camping power lead from when we used to go trailer tenting.  I've got some soil warming cable too to make a hot bed for germinating even more seeds.  I've also sown some Onion seeds (Bedfordshire Champion and Red Baron).  I've never done this before but the results with sets have been decidedly mixed so I thought I'd give seeds a go.

And on the allotment itself, digging has started. 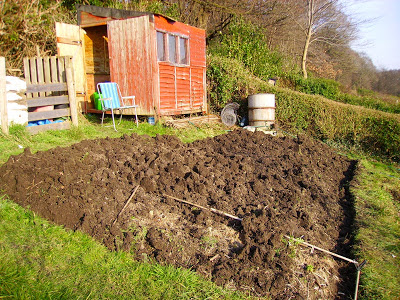 Old Foxy strolled across at one point but didn't wait to have his photo taken, or help with the digging either.  Though I must say he looked very fit and healthy, absolutely in the peak of condition.
Posted by Gordon Mason at 8:51 pm 6 comments: 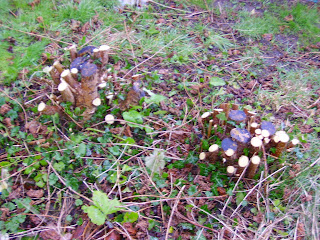 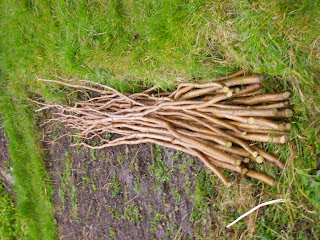 Not deterred by rain and hail, the coppicing is also finished.  Yay!  Job done, even if the photos are out of focus because my hands were cold.
Posted by Gordon Mason at 5:23 pm 6 comments:

....and the job is nearly done, the job being that of tieing in the very thorny Himalayan Giant blackberries.  And it's only "nearly done" instead of completely done because I ran out of string.  The gardener's faithful friend, string!  But the blackberry hedge is now not so much wall-of-sound as wall-of-blackberries.  It's fully 15 feet long and about 5 feet high (this is only about two-thirds of it). 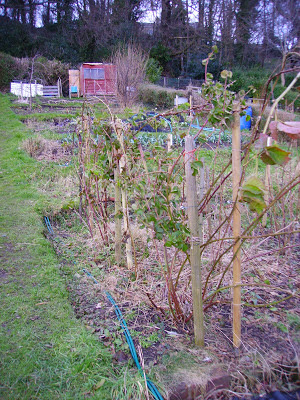 Anyway, let down by absence of string,  I moved on and pruned the autumn-fruiting raspberries (Joan J) and in the process gained a stonking pile of pea sticks from the prunings. 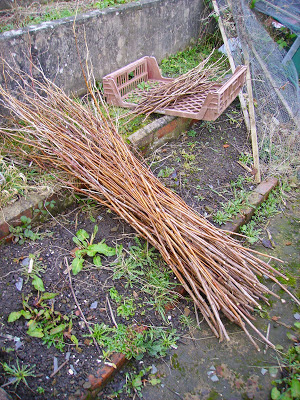 Frugal or what?  The raspers will look better once they've been weeded so you can wait for a picture of those!

Then there's a load of work to do around the summer-fruiting raspers (Glen Summat-or-other).  They didn't deliver many rasps last year but had their best-ever season in terms of actual growth, which means (hopefully) a good crop this year.  But they too need a better support system, done early and with wire into which they can be tied.  That'll make a radical change; they're normally done [too] late and with yet more string because they've degenerated into a floppy mess because they weren't done early enough.  This year I'm determined to get on top of them early enough!

And finally, I've started to coppice the hazel again.  I last did this about five years ago and although I got some decent poles off it they were a bit too gnarly & lumpy to be much use, so they've sat around in various spots being not much use at all.  Think I'll probably end up burning them.  But the ones I've been working on today are altogether different.  This is coppicing as it should be done - the poles are long and straight, ideal for bean poles and/or sweet peas.  Here's a before, 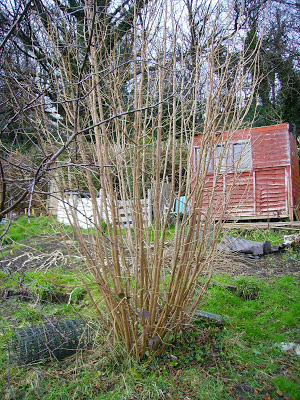 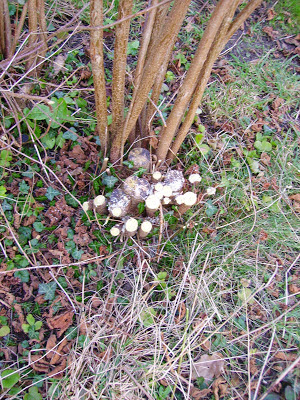 and 'poles' view of the hazel clump.  Neat! 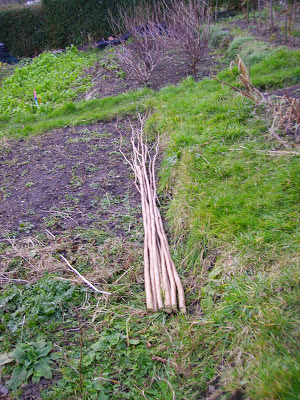 I think that in terms of job description I've been an underwoodsman today.  Suits me.  I quite fancy being a charcoal burner but it'd be a bit hard to get away with that on an allotment!