I should, as I type this, be on a ferry in the middle of the North Sea, en route to Denmark to start the first leg of Short Way Round, my motorcycle trip round the edge of Europe from the very top of Denmark to Istanbul and beyond. For all you know, I may be on that ferry. But I’m not, I’m at home. Short Way Round is postponed, in favour of an equally big adventure on a different continent.

Those of you with long memories may recall me banging on about my Winston Churchill Travelling Fellowship in 2001, following in the footsteps of David Douglas (Google him), botanist and plant collector (1799-1834). This adventure is to do some unfinished business from my Fellowship and start an entirely new project.

Context first. In 1827 Douglas set off from Fort Vancouver on the Columbia River in the Pacific Northwest with the voyageurs of the Hudson’s Bay Company to travel east across the continent. Their destination was York Factory, the HBC’s eastern supply base for the fur trade in the Canadian sub-arctic, from which Douglas was to sail on an HBC ship back to England. They made it, walking and birch-bark canoeing. D caught the ship and made it safe home for further adventures before a gory end on Hawaii in 1834 (I’ve stood where he died and at his grave in Honolulu).

York Factory is still there (Google it) and almost as hard to access now as in 1827. There’s no road or rail link; there’s no electricity and no food, apart from what you bring in. But I’m going there in the summer, with two colleagues (one from Scotland and one from Oregon) to start filming a television documentary on Douglas.

None of us have been to York Factory before; indeed it only gets about 70 visitors a year. Only being open for 3 months of the year, frozen tight the rest of the year and at risk of polar bear attack may have something to do with that of course! It’s only about 60 miles south of Churchill, where the bears congregate in the town waiting for the sea to freeze (it’s still frozen now).

The route runs something like, fly to Winnipeg, fly further north in a smaller plane, get a Greyhound bus for three hours on a gravel road to (literally) the end of the road. Then get an even smaller plane (5-seater, float plane I suspect) to fly to York Factory. Then do it all in reverse 3 days later.

And in due course there’ll be more filming to fill in more of the blanks of the Douglas story.

This is an opportunity which has been a long time coming and can’t be turned down. Short Way Round, on the other hand, can be done ‘later’. And it’s only postponed, not ‘off’. I’m really looking forward to this; can you guess?!!
Posted by Gordon Mason at 9:31 pm No comments:

At last planting has got under way, with cabbages (spring, round and red) and cauliflower. We love red cabbage. Monty Don describes it as being only slightly ahead of boiled rat in culinary acceptability, at least by his children. All I can say is they've never had any of ours, cooked with red wine, apple and marmalade. Yummy.
But growing brassicas round here is an iffy business on account of they pigeons, curse 'em. I've tried various half-baked approaches with dangling CDs to scare them off but I think they treat them as vanity mirrors; certainly doesn't scare them off. And I've nearly broken my neck innumerable times getting my feet tangled up in the netting I've carefully draped over the cabbages to keep pigey off. None of it is much good.
The best I've found so far is Fort Brassica, constructed from uprights of chicken wire, lovingly garnished with tatty old netting and tenderly enrobed with string. 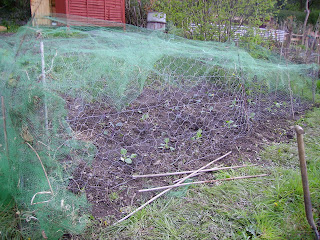 Let's see the beggars get through that.
Running low on blood sugar by the end of the afternoon and lacking the energy to construct a smaller version for the cauliflower plot, I cobbled together Mark 2. 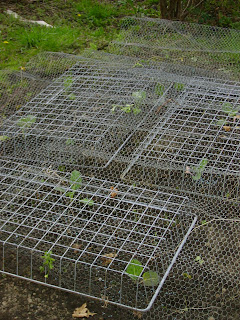 The observant among you will notice what were once wardrobe drawers from IKEA forming a key part of the construction.
Lest you think I idle my time away just pratting about with cabbages, chicken wire and string I should show you my other pride and joy. Just look at these mangetout; sown in a gutter at home (no, it wasn't attached to the house at the time, honestly, you do take this too seriously sometimes) and raised in the conservatory. Then simply slid into a wee trenchette and Bob is your father's brother. Still need plenty of anti-pigeon fortifications though. 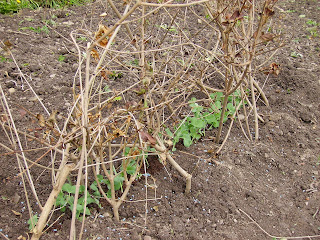 I've also discovered another reader, just over the grapevine at the bottom. Good to speak to you today; hope all this makes sense.
And finally, longstanding readers of this blog may be wondering about a progress report on Woody's motorcycle adventure around Europe (working title Short Way Round). Tune in on Wednesday (30th) for an update. A bientot; tot siens!!
Posted by Gordon Mason at 8:41 pm 2 comments:

Turn your back for a moment and you never know what will happen. In this case Ivan-on-the-next-plot has had a massive burst of enthusiastic hedge trimming and the hedge between us is now down to about 3 feet or less and very thin. 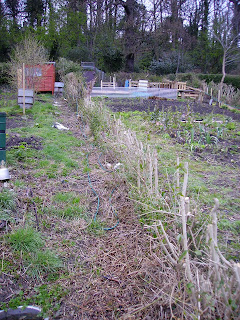 Hmm
Not sure what i think of this. It'll certainly be easier to keep tidy, once it's regrown a bit, but it compromises my privacy a bit and offers no security at all.
Hmm.
I'd like to have known he was going to do it too. Didn't necessarily want to be asked, in the sense of being asked for permission, but it would have been nice to be consulted, it being a joint hedge and all. Ah well, it's done now & not worth falling out over.
What else is new? The grapevine is now tied in to three posts and two strands of wire, ready for some growth this summer. 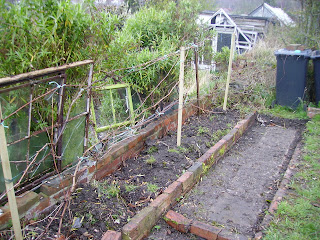 Chris, my on-plot neighbour has been very active and threatens to put me to shame. He now seems better established, having done lots of work over the winter.
And finally, I've now joined the plot association. 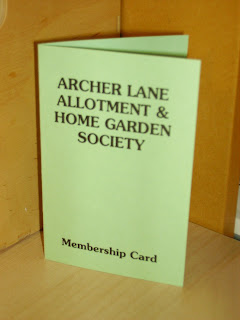 I've belatedly realised that they aren't just an association for plot holders but a shop, cheap garden stuff for the selling of but only between 10.30 & 12 on Sunday mornings. Still think they could be more proactive in marketing themselves to plotholders but no matter, I've joined now. Lots of amusement from Wilma Wilbury, who sees this as a sign that I'll soon be growing chrymanthesums and wearing a cardigan. Pah.
Posted by Gordon Mason at 9:15 pm 3 comments:

Gnome asked for a feature on Lovage, after my comment about it waking up from the winter and heading for a Lovage hedge this year.
Herewith, from a combination of Wikipedia & my experience of it. Lovage (Levisticum officinale) - well, you didn't expect a former botanist not to give you the full name did you? - is dead easy to grow and once you've got it it'll take a JCB to get rid of it. But why would you want to get rid of it? It has a lovely flavour, akin to celery which it vaguely resembles, and the leaves and seeds are used to flavor food, especially in South European cuisine. It is a tall (3 to 9 ft) perennial , hence the reference to a Lovage hedge. It looks pretty impenetrable when in full flow but is quite soft really and dies back completely in the autumn so is no use at all as a 'real' hedge. Lovage also sometimes gets referred to as smallage, but anything less appropriate is hard to imagine. Mine was grown from seed last year and I confidently expect it to get to at least four feet this year. Here it is now: 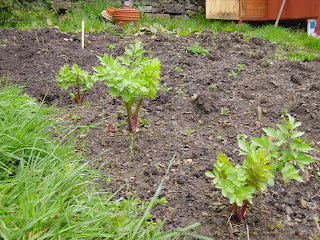 Lovage is considered to be a "magic bullet" companion plant; much as borage helps protect almost all plants from pests, so lovage is thought to improve the health of almost all plants. In Germany and Holland, one of the common names of Lovage is Maggikraut (German) or Maggiplant (Dutch) because the plant's taste is reminiscent of Maggi soup seasoning. Or could this perhaps be a vice versa?? We use it a lot in Wilma Wilbury's damn fine fish stew.
Finally, Lovage tea can be applied to wounds as an antiseptic, or drunk to stimulate digestion.
There you are then; all the news that's fit to print about Lovage. I particularly liked Maggikraut; I think I met her once.
Posted by Gordon Mason at 5:50 pm 5 comments: