But I did get back to the allotment today, with a newly repaired strimmer and made vast amounts of strim, strim, strimmy progress. Mid-way through the afternoon Chris & Susan (who share the entrance and other half of the double-width plot) arrived, with concern about was I all right, had noticed crops going unpicked, vegetation climbing to the skies etc. Explained that I’ve had a travelling summer and an allotment neglected at a critical moment, of which there have been many, never gets back under control until autumn. I was quite touched at this concern.

And now it feels, courtesy of a mega-strim, that it is heading back to the straight and narrow. I did begin to consider whether keeping the allotment was truly viable; I’m 60 in 18mths time and intend to do more travelling so don’t want to be constrained by my cabbages, so to speak. But nor do I want to walk away from something I’ve invested a lot of time and energy in, and which I do want to maintain as an active energetic interest for a zillion years to come. I think I do need to think rather harder about how much of it lies fallow next year so I can concentrate on doing the bits I have in cultivation rather better.

As ever, there are competing priorities: 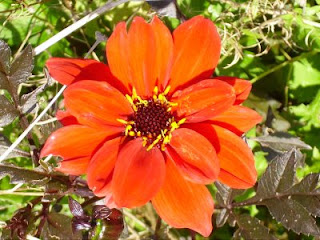 Think I’ll start the Bishops off in pots next year cos starting them in the ground was no use whatsoever.

And a piece de resistance of some totally unexpected Autumn Bliss raspberoonies, 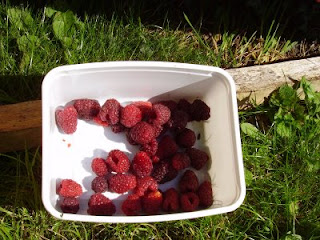 which went down very well with ice cream as dessert for Woody & Wilma Wilbury this evening. This is seriously good news because it means they’ve established properly and I should be able to get a decent crop off them next year.
Posted by Gordon Mason at 8:52 pm No comments:

In fact it's like a jungle right now, due to being away following David Douglas. Truth is, the allotment looks awful. 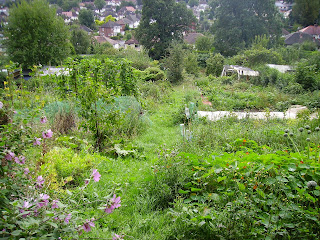 But, given the choice of travelling where I've been and having a tidy allotment, travel wins hands down.
Today was the first opportunity to get at it and I made little real impression. Mowed the central path and the side path.
Had to stop in the end as the humidity was so high I was sweating cobs. All of which prefaced a massive thunderstorm later. Why is it so wet? It's been awful just lately.
Posted by Gordon Mason at 8:14 pm 2 comments: