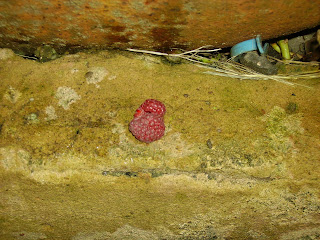 I’m quite pleased to be eating the last raspberry on 9th November, considering that last year the whole crop was worse than useless and I ended up grubbing the pathetic little stumps out. No chance of that this year, in fact I think I’m going to get some more – we like raspberries!! They desperately need weeding but they’re not alone in that.

The plot is generally looking at its worst at the moment; dull, drab and grey without any autumn digging done and generally sodden.

But I’ve looked at the weather forecast for Churchill, Manitoba (just up the coast from where I spent part of the summer at York Factory) and that puts it in perspective. It’s now frozen in and will stay that way until April. Daytime temperatures next week won’t get above freezing and night-time will get down to -14C. And it’ll get a lot lower than that; it’s still only November and the sea hasn’t frozen yet. I’m quite attracted to those temperatures but it would make allotmenting a bit tough. They did try, in the late 1800s, to develop gardens at York Factory but the soil was poor and wet and the growing season was simply too short for anything but quick stuff like lettuce. I think it’s safe to assume that the grizzled traders of the Hudson’s Bay Co’y weren’t heavy consumers of lettuce.
Posted by Gordon Mason at 4:46 pm No comments: