101 Dalmatians?, and another question

Well, not exactly, the Dalmatians that is. It's just a weak link to how many Leeks I've been transplanting this morning - viz 116. Sorry, i did say it was a weak link! They've spent their formative years in a nursery bed (never underestimate the value of a good nursery education) and just look at them now. 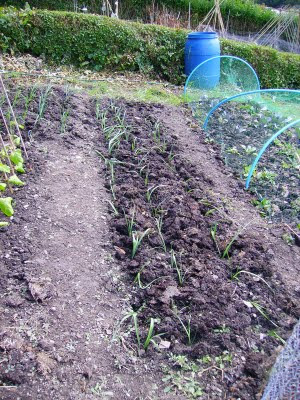 Most of them are Musselburgh but there are about 30 which delight in the gloriously unspecific name of East European Leek. I'm sure they have a proper name but it'll be in Polish.

I've also been sticking the Bishops in a pile of poo. Alternatively, I've transplanted the Bishops of Llandaff (dahlias, don't y' know; do try to keep up), very carefully, into lovingly prepared planting holes, each with a good shovelful of sh** manure to help them on their way. 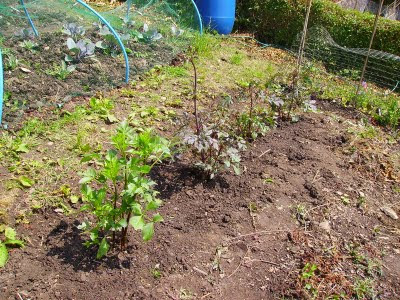 Speaking of the nursery bed, the bit not full of leeks is full of assorted saladings and they're looking pretty neat. 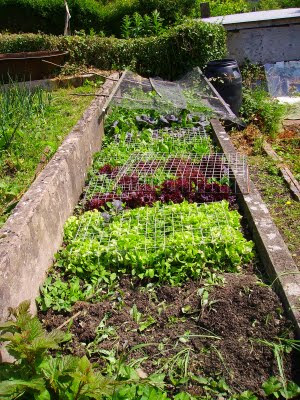 Salads? We got 'em. Sadly, what we ain't got is successional stuff coming along behind as I have failed yet again on this key skill. Pah.

And, lest you think this is all done by pixies and elves (I wish), there was a rare sighting today of the Wilbury in all his glory. 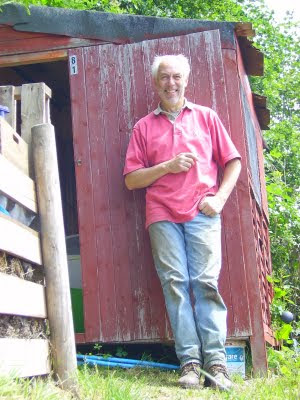 Note the grubby knees, from hewing & delving in the earth. Note the slightly manic feature caused by exhaustion and trying to do too much too often (ah, 'twas ever thus). Finally, note the slight flicker of puzzlement as he contemplates the other big question, namely:

What happened to my peas?

To explain, I sow peas in half-round gutters. They germinate well and they transplant even better, just sliding out (I block the end with masking tape and it just peels off, mostly). But this year I've had real trouble with them.

The first batch were in the greenhouse, on the floor, and germinating well. Then, over a day or two, they weren't there any more. A-ha, I thought, chuffing mice. They do a lot of chuffing, mice; second only to rabbits.

So, sighing wearily, I started again but this time I put them on a shelf in the greenhouse to keep them out of the way of the meeces. Time passed, and some more, but no peas. What's going on here, I think to myself. Eventually, nothing to lose because they clearly aren't going to germinate, I start rooting around in the compost in the half-round gutter to see what is going on. And what do I find?

Now this is worrying. Either the peas have acquired the power to dematerialise from my greenhouse and rematerialise somewhere else, and are even now gracing tables at Hogwarts Academy for the Terminally Incompetent Gardener. Or, and this is worse, perhaps I only thought I sowed them and I have in fact been carefully looking after a gutter full of nothing but potting compost.

I fear that all the indications point to the latter position; indeed the men in white coats have very carefully explained this to me as they helped me to plant a 3rd gutter.

I know they're in there this time; the little beggars had better germinate!!
Posted by Gordon Mason at 8:18 pm 5 comments:

When I installed a semi-permanent hosepipe on the plot, to save faffing about coiling/uncoiling it every time I wanted to use it, I carefully threaded it through the base of the hedge out of the way.

Well, that was the plan. Just about every time I cut the hedge I also cut the hosepipe.

Hedge looks great. Hosepipe doesn't. It's a good job they're easy to repair.

Memo to self - take more care next time!
Posted by Gordon Mason at 9:42 pm 2 comments: