Return of the Greenhouse

I had a greenhouse at our previous house and left it behind when we moved; too difficult to dismantle and remove.

I've missed it since the day we moved, but no more; I've spent the weekend assembling my 60th birthday present to myself - a 6ft x 8ft greenhouse.

It hasn't been the easiest of jobs. 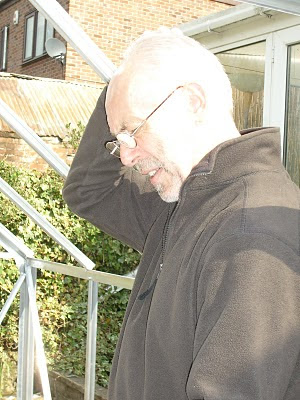 The instructions were clearly written by someone who was completely familiar with the task and all the various complex shaped and almost identical components, which is always a mistake. 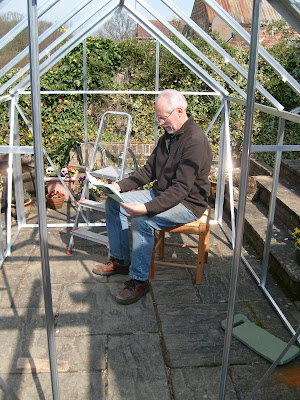 I think instructions are best written by (and certainly for) a complete idiot who has never done the job before. I managed to keep the air relatively clean, even though some bits turned out to be assembled in mirror-image format and had to be dismantled & remantled. Some bits turned out to be upside down; not much use when you're trying to hang a door from them. Other bits, which were actually correct, had to be disconnected in order to fit later bits of the assembly. Did the instructions mention that at any point? Not a word.

I'm not usually cack-handed at this sort of thing; I have a Masters in IKEA assembling. And I couldn't have done it without Wilma Wilbury's assistance; just didn't have enough hands. Even with the two of us we didn't have quite enough hands and had to use masking tape to stop things wibbling into the wrong place.

But it went together eventually 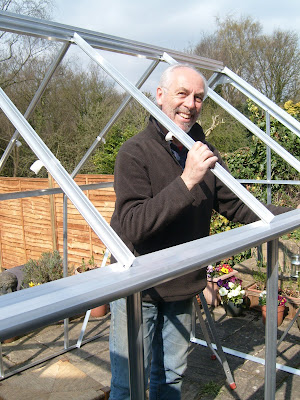 and after a spot of heavy lifting it moved off the patio and into it's home in the garden. 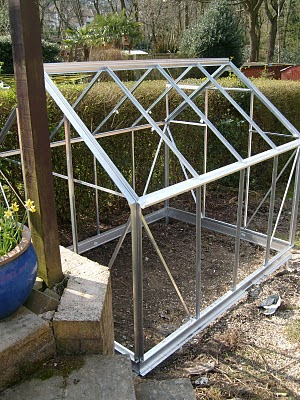 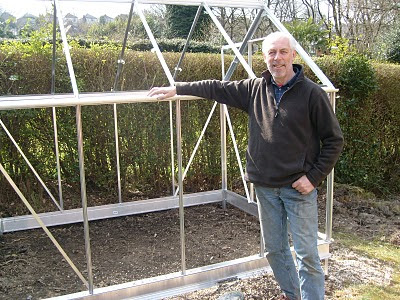 It's now about two-thirds glazed; need to get on with it because I've got plants queueing up to get into it. And a pigeon has already christened it!!
Posted by Gordon Mason at 9:15 pm 10 comments:

..... just missed being stranded in the USA for weeks on end. I flew back on Tuesday (upgraded to Club Class; thanks BA, could get used to that) and the volcano blew on Thursday. Just two days it needed to wait but no, I'll have to go back to work tomorrow.

Pah, indeed!!
Posted by Gordon Mason at 7:37 pm No comments:

.... David Douglas, botanist & plant collector (1799-1834) first set foot in the Pacific NorthWest, at the mouth of the Columbia River. His journal records:

One half of the Wilburys is in Oregon, launching the film "Finding David Douglas" at the World Forestry Centre, Portland. Guess what the weather was like 185 years later. Yep; you got it.

Wilma Wilbury remains at home and, counter-intuitively, has taken the opportunity to remove a Douglas introduction from the garden. Sitka Spruce are a mainstay of the UK forestry industry but are NBG at all when planted too close to the house by the previous owner and left to grow , and grow, and grow. The garden looks better already, I'm told.
Posted by Gordon Mason at 5:40 am 2 comments:

Last year's attempt at Asparagus was so poor (rubbish crowns, poor preparation, done in haste, predictable result) that it warrants another go. So here it is: 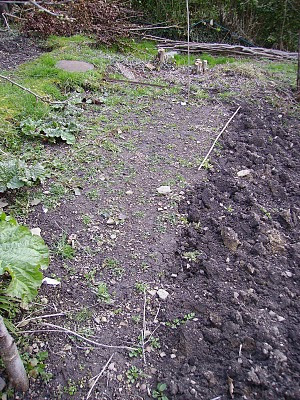 - funny looking things aren't they. The asparagus-eating spider crabs have landed!!
After 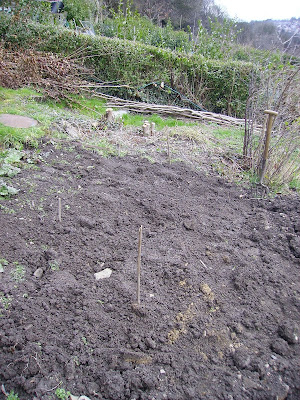 And look at this - the first proper "produce" of the season. 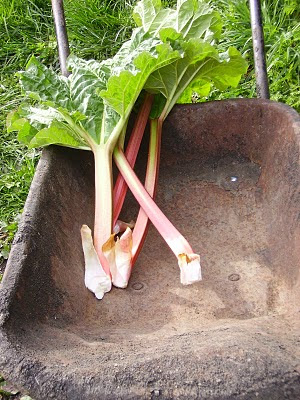 And finally, doesn't this look neat? 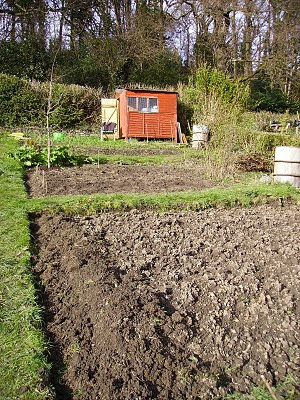 I'm quite chuffed with just how neat & tidy this looks. Mind you, the bit behind me which you can't see tells another story!
Posted by Gordon Mason at 9:12 pm 7 comments: