Every gardener sometimes needs an Assistant. 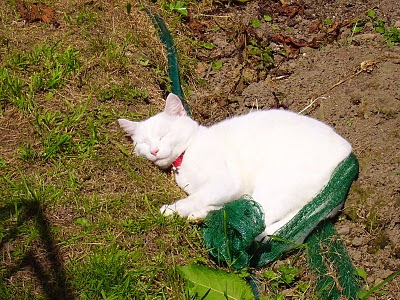 Ideally, more energetic than this one. But it was nice to have company.

And look at this - my first Fildenkraut - aka German Shredding Cabbage. 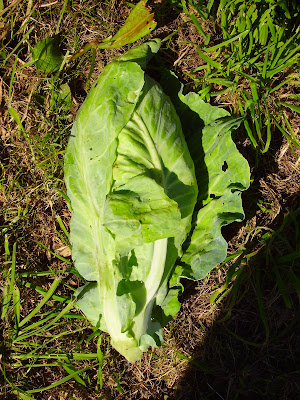 Hope it tastes as good as it looks and hasn't got extra protein (aka slugs) secreted deep inside.
Posted by Gordon Mason at 5:35 pm 6 comments: 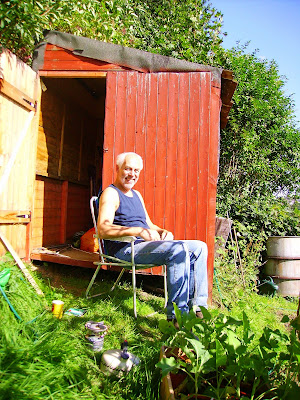 Today has been another harvest & maintenance day. The blackberry bonanza has finally ended and the plenitude of raspberries has just begun. I do like a nice plenitude, especially of raspers.

The superfluity of courgettes continues (yeah, I know, 10 plants, what was I thinking of? Doh!) 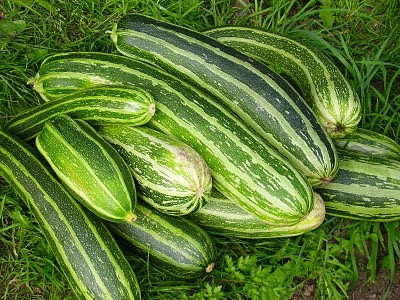 and has been joined by a glut of gherkins and cucumbers. I find it hard to tell which is which because the labels are all overgrown now and outdoor cucumbers are a bit knobbly and look like gherkins anyway, so tend to call them all gherkumbers; they all taste the same anyway!

But the rainbow chard is doing really well - look at these chaps. 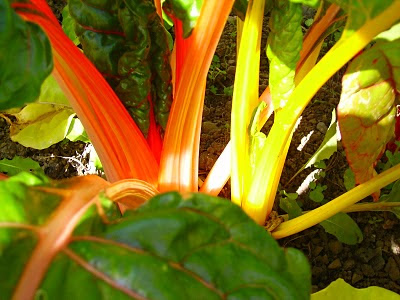 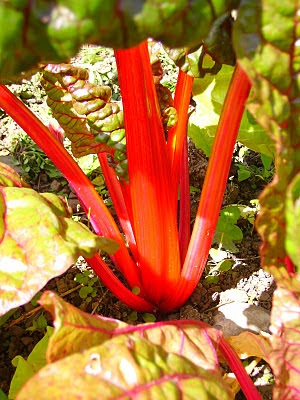 No idea what it tastes like & I've never grown it before but it looks so good I'll definitely do it again.

And finally, I turned around incautiously at one point while holding the [working] strimmer (this is the maintenance bit) and inadvertently strimmed the top off one of the dahlias. 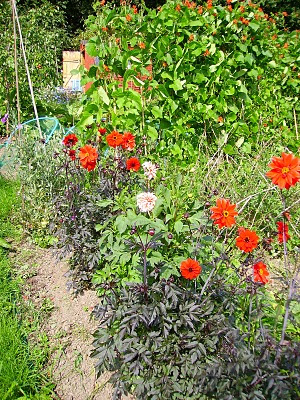 The pale one in the middle is no more. Oops; I'm just glad it wasn't one of the several Bishops of Llandaff - I'd hate to be accused of Ecclesiasticide.

PS - and in a packed programme tonight, I've just lopped a chunk out of my little finger (well, one of them actually; I do have two, although at this rate perhaps not for much longer) while cutting back tomato plants. I knew those scissors were sharp but they're really sharp. Not so much "blood on the tracks" as blood on the tommyatoes. The sacrifices I make, eh?
Posted by Gordon Mason at 8:37 pm 8 comments:

Oh, I do hope so. We bought 12 plants of Marshmello at the start of the year and had loads of strawbs from them (well, apart from those that Tufty ate!). And now they're runnering furiously so I've planted them out and dug the runners in a bit (there are at least 50). 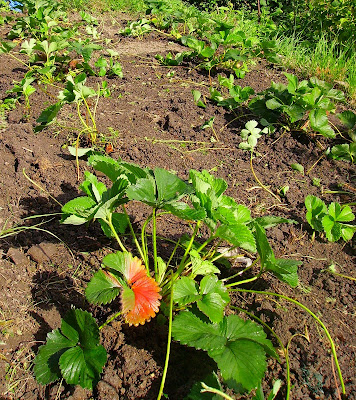 Here's looking forward to lots of luvverly strawbs next year.

And the rose hips are coming on well too. 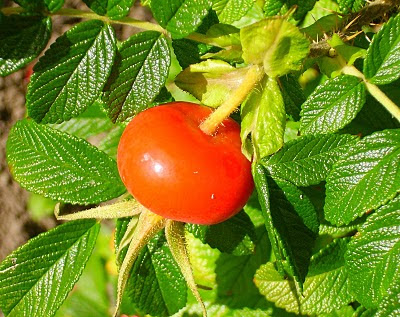 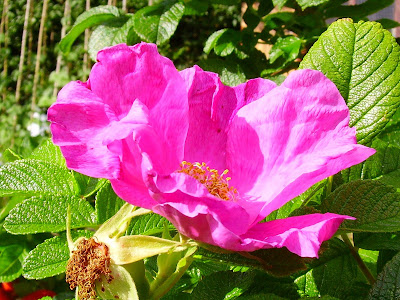 I'm not growing them, you understand, but they seem unusually prolific this year. As a child, growing up in the Northeast (Ee, it were 'ard, we used to eat gravel for breakfast. Breakfast? Gravel?, you were lucky etc) us kids used to collect rosehips in the Autumn and sell them to the local chemist, who despatched them to some stonking great factory to make them into Delrosa, rose-hip syrup, which they then sold back to our mothers at greater cost than us kids got for selling them to the chemist.

Errm? Something not quite right there? Why didn't we just eat the rose hips & cut out the middle man? Not sure that ever occurred to us. Perhaps they're poisonous in their 'raw' state.

Did anyone else do this?
Posted by Gordon Mason at 8:18 pm 8 comments:

Yes, the annual courgette glut is in full swing. Industrial quantities of ratatouille are being made (fermented?).

The gherkin glut is just beginning (a mere 13 today). Do I like gherkins? I don't know actually; I've never knowingly eaten one, and I guess I would know if I'd eaten one - they don't look the sort of chap you could eat by accident or without knowing about it!! But I saw this packet of seeds for East European Gherkins and thought they sounded worth a go. I guess I'll like them soon? What do you do with gherkins? Pickle them? Advice please. Save me from myself and the gherkin monster.

We also got the first of this year's runner beans today, 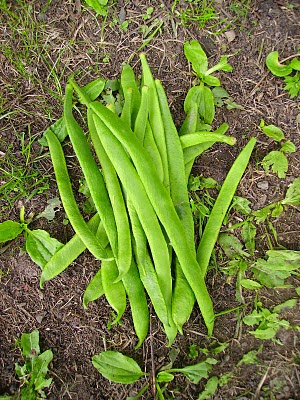 so that glut will be on the way soon. And then there'll be the climbing French. Good job we like them.

And finally, for all you cornflower lovers, here's a pic of the cornflower hedge 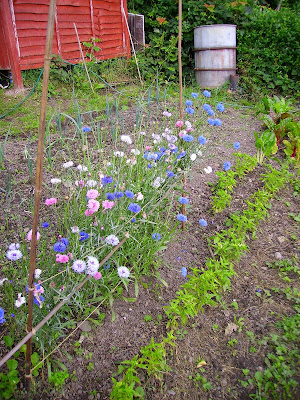 and the Bishop of Llandaff. 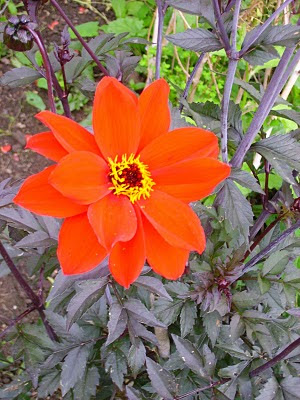 He's such a poser; gets in everywhere.
Posted by Gordon Mason at 8:58 pm 12 comments: 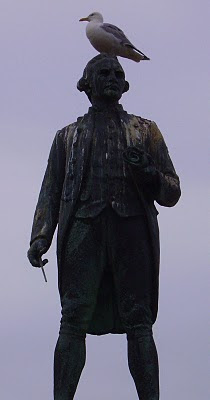 Three times round the world in the 1760 & 1770s and look what happens in your home port. Seagulls crap on your head. Just no respect.

This is of course Captain Cook and we were in Whitby, 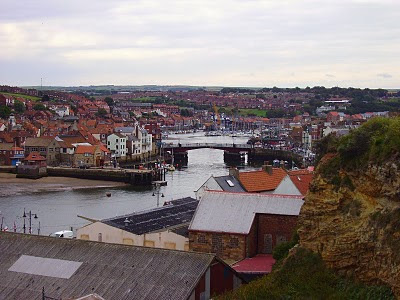 land of glorious fish and chips and kippers. The car now reeks of smoked fish but that's a small price to pay for the best kippers in Britain. Others from Craster, Arbroath etc may disagree but, look, you're just wrong. Whitby rules!!

I had one of the kippers for my tea (I am obliged by Madam Wilbury to cook it outdoors on a camping stove, otherwise the house reeks too) and very lovely it was too.

Incidentally, have I ever told you the story of Captain Cook's goat? Oh well, if you insist.

Back in 1768, when Cook was victualling the Endeavour he added to the crew a goat, to provide milk for the officers and the sick. But this was no ordinary goat. This goat had just returned from circumnavigating the globe on board the Dolphin. So, at a time when most people travelled hardly at all and often no further than the nearest market town, here was a goat which had already circumnavigated the globe once and was about to set off and do it again.

The goat, of course, to maintain a milk supply, would have had to be "put to the billy" at some stage along the journey and there would doubtless have been kids (this is kids in the goat sense, you understand). Interestingly, descendants of these kids are thought to survive on Arapawa Island, NZ, and are under threat of a cull.

Unlike some of his crew the goat came back safely a second time and settled down to an honourable retirement with Mrs Cook in the Mile End Road.
Posted by Gordon Mason at 5:41 pm 2 comments: