In just one afternoon....

.... I cleared the brassica patch, 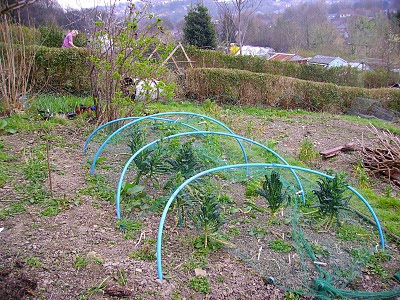 rough dug it, rough manured it (is there any other way?), chopped the manure in and transplanted: 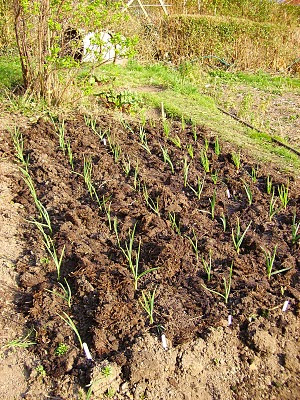 All of them were started in the greenhouse in November and sat in a big sulk for nearly three months before they did anything at all. But they look good now; fingers crossed that they stay that way! When I'm transplanting I always try to make sure the plant doesn't know it's left home. Usually it works!

And look at the Lovage; 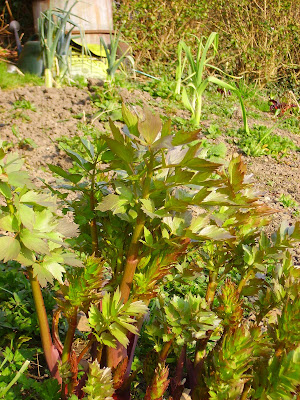 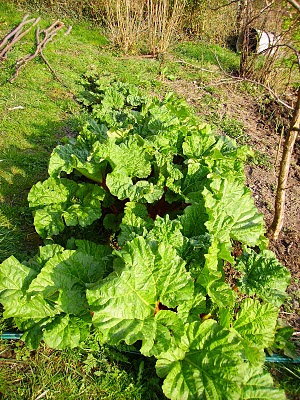 It's my signal of Spring, when the Lovage comes back.

And don't the raspberries look good, 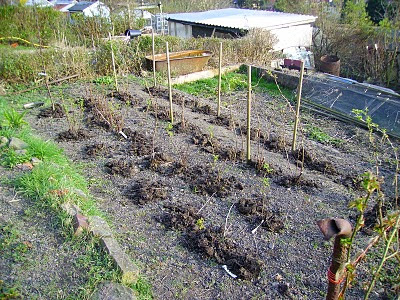 every one of them wrapped up in it's own personal pile of manure. Just what the doctor ordered.
Posted by Gordon Mason at 9:03 pm 10 comments:

....manure, that is. Whatever did you think I meant?

At long last I've done something about the manure-less state of this plot. The lack of ongoing fertility additions has become ever more obvious. Steps had to be taken. So Shaun arrived with his big tractor this morning and his even bigger trailer-load of manure. £25 for a big trailer load strikes me as worth every penny. And it's really good stuff; well-rotted, not like some I've seen which was still warm and reeking of ammonia. The worst I ever handled was pig manure; how did I know it was pig manure? - I found a dead piglet in it!

Anyway, back to the plot. Shaun's delivery completely blocked the access road around the allotment, greatly inconveniencing the dog walkers who also use it. Some of them are less than punctilious about cleaning up after their dogs. Some of them also occasionally forget for whom the road was made, like the one who almost felt the sharp edge of my tongue this morning.

"Is thet manure?" she asked, querulously. "Nah, luv, it's Attar of Bleedin' Roses; course it's manure. Chuffinelle." I almost said. But I was of course ineffably polite; as you'd expect, although some effable words did go through my mind.

A trailer-load of manure is a pretty daunting prospect though. You look at it and think, Lordy, Lordy, this is a piece of work. I'm never going to be able to shift this; will my back stand up to it?

But it's like eating an elephant; a bit here and a bit there and soon enough you've eaten an elephant. And probably tastier than a pile of manure.

Some of it went through a specially-created hole in the hedge.

The rest of it went in a barrow down the hill. It was easier and faster through the hole in the hedge. The barrow developed a mind of it's own going down the hill. My role was simply to cling on and skid-steer it.

Laugh? You'd have lain on the ground; I nearly did, several times.

But it all got done, in only three hours and with no undue twanging from my back (which was my greatest worry about the whole process). And here's how it looks now. 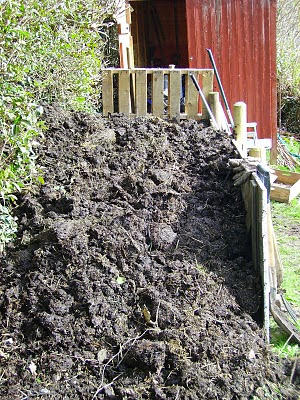 Is that a pile of manure or is it Attar of Bleedin' Roses?
Posted by Gordon Mason at 3:32 pm 4 comments: 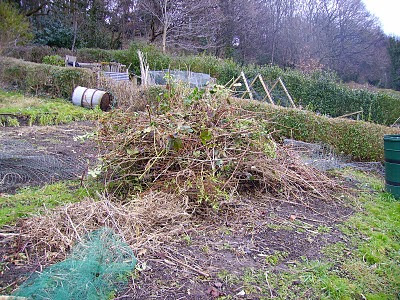 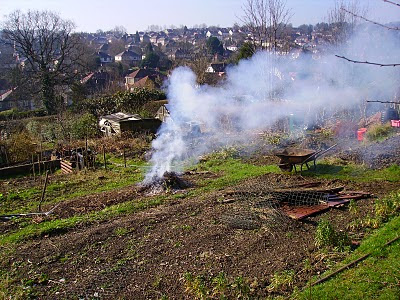 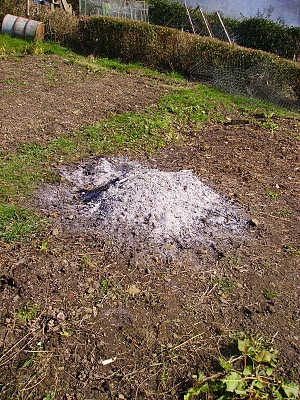 Sometimes, only a Mother Of All Bonfires will suffice.

Woke up one morning to find someone had crept in during the night & filled my throat with rusty razor blades. Opened my mouth & moved my lips, as for speech, and not a sound emerged.

Since then it's improved a bit and the hosepipe someone else had attached to my nose has been removed. In short, I've been full of cold and have done absolutely zilch on the alloto.

But that must change.

This week I are mostly, nay totally, not at work and thus have a pressing appointment with a pile of manure. And a new shed roof. And strimming. And seed sowing. And the garlic needs planting out.