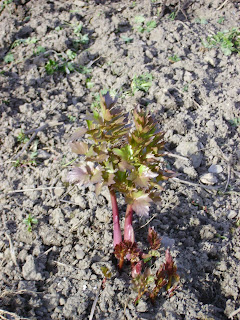 Regular readers will know that I'm very fond of Lovage and it is a regular contributor to tasty nosh in the Wilbury household. Indeed it plays a big role in Wilma Wilbury's famed fish stew. Not for nothing is its German name Maggikraut.

It's a perennial and it's reappearance is eagerly anticipated. I've topdressed it with National Growmore so am hoping for big things.

And look at yon rhubarb thicket. 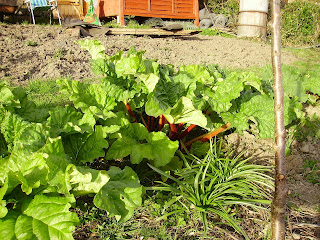 It'll soon be time for a Rhubarb Bellini.

And as for Love-age, forgive the excruciating pun but it seemed appropriate somehow, given that our son, on the weekend of his 30th birthday, has got engaged. We're delighted and very proud of them both.

I've been following, and bidding on, a greenhouse on eBay. 8ft x 6ft. It was local which was a big plus but still needed complete dismantling (& reassembly of course).

It went for £123 which was more than I was prepared to pay. Rule of thumb is something like - if a new one (Homebase or B&Q) costs £250 I'm not prepared to pay half that if I have to dismantle it, transport it and reassemble it. Doesn't seem like much of a bargain after all that!

Last autumn, on the last occasion when I wanted to use it, my venerable petrol lawn mower declined to start. It really really declined, several times; so the lawn has been shaggy all winter.

Cleared the shed out a bit today. Looked sternly at the lawn mower (which has had the same tank of petrol sitting in for 5 months now), primed it, pulled the cord twice and halle-chuffing-lujah; it started.

Perhaps the winter rest has done it good (or mayhap I have mower-repairing pixies in the shed?).

...... but no photos because I stupidly forgot to put the memory card back in the camera.

The onion plantation is done, after a good going over with Growmore. Apparently they used to call it National Growmore during the war years. I suppose it was like (well, in spirit anyway) that malt extract and clinic orange juice us deprived kids in 't North used to get when we were little. Not that I knew I was deprived, but I did like the malt extract especially. Virol, I think it was called.

Anyway, digressing merrily today, a gazillion onions and shallots in PLUS half a row of garlic. This is breaking all the conventions that garlic should be planted before Xmas and needs a good spell of cold weather. This has had neither but they were still selling it at the garden centre so it should be OK?? Mind you one of the bulbs was mouldy and the other two were past their best. Still, if I get any garlic at all it'll be a bonus.

Half the raspberroonies are now tied up with string - no, not in a brown paper package, that's just silly - and, wait for it, six Asparagus crowns planted. It'll be 2011 before they are properly productive. They're immediately downhill from the rhubarb (which is brilliant this year) and between the plum tree (which needs to get it's arse in gear or it's out - 1 plum last year; get a grip) and the hazel thicket (which needs coppicing; get me, I've so much land I need to go out and coppice the hazel!! It's quite a small thicket, but it does need coppicing). This is all beginning to sound like an "area for stuff which will be there a long time"

And I've got a touch of sun and wind burn. Yippee! Hasta la Vista, baby.
Posted by Gordon Mason at 4:46 pm 2 comments:

I was at Kew last Monday, looking at archive correspondence from/to/about David Douglas. The first letter I picked up, dated March 23 (my birthday) 1835 was from John Douglas (DD's brother) to William Hooker at the Glasgow Botanic Garden. It was the first letter written by John after learning of his brother's death, far away in Hawaii, and he records his "distress at David's death".

This is the first time I've ever seen Douglas referred to in a family way - he's normally referred to as simply Douglas, or Mr Douglas or, after his stay in California, Dr Douglas. I thought that was really quite touching.

Incidentally, William Jackson Hooker and his son Joseph Dalton Hooker were the intellectual powerhouses of Kew throughout the 19th century. There is an excellent biography - the Hookers of Kew - which I commend to your attention, although if you go round nowadays asking for the Hookers of Kew you might get quite a different sort of attention.
Posted by Gordon Mason at 7:36 pm 1 comment:

Here are the plugs I transplanted a month or so ago, all doing nicely. 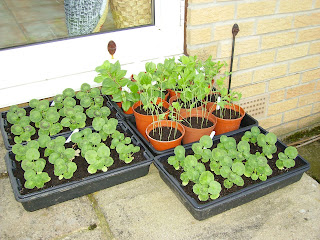 And here are the ones I bought today (just in time, the season for plug plants is drawing towards its close I think) + piles and piles of sowing. 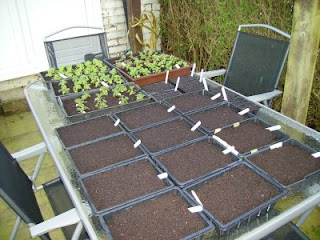 And finally, here they are in their heated propagator - aka the conservatory. 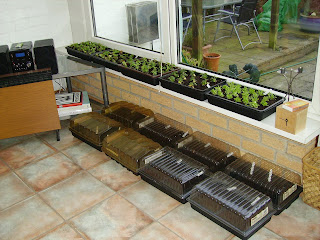 This is an annual ritual which Wilma Wilbury has just about got used to!
Posted by Gordon Mason at 7:27 pm 2 comments:

David Douglas, in spring 1826, had decided [previous post] to stay on another year in the Pacific Northwest, collecting specimens for the Horticultural Society. But he clearly felt he needed to justify his decision:

"However, I am uncertain how far I may be justified in so doing. ....Two considerations presented themselves: first, I am incurring very little expense; second, being laid up an invalid last autumn during my seed harvest, I doubtless lost many interesting things which I would otherwise have had.

Lest the former [the additional cost of staying an extra year] should be made any objection to , most cheerfully will I labour for this year without any remuneration, if I only get wherewith to purchase a little clothing."
Posted by Gordon Mason at 8:56 pm 3 comments:

......The Royal Horticultural Society, dedicated to advancing good gardening, is founded by Joseph Wedgewood. It wasn't actually Royal at that time, that came later.

On this day in 1804 David Douglas, Botanist and Plant Collector extraordinaire, was only four years old. Douglas's explorations in the 1820s & 1830s were funded by the Horticultural Society before his death in dreadful circumstances on Hawaii in 1834.

Long-time readers of this blog will recall that I'm involved in making a TV documentary on Douglas's life and works. Last year this blog followed his footsteps contemporaneously across North America to York Factory on the shores of Hudson's Bay, culminating in a filming trip at York Factory with polar bears and other adventures. To bring you up to date, the film crew have just returned from Hawaii where they filmed at Douglas's grave and the site of his death (without me, sadly, altho I've been to these locations before).

We start filming again in the UK in May, with a week in London and a week in Scotland. I'm off to the RHS and Kew on Monday to discuss details. In the meantime parallel blogging (Woody in 2009, Douglas in 1826) will resume shortly. For the moment, here is Douglas considering his position in the Pacific Northwest, Feb 1826:

"From what I have seen in the country, and what I have been enabled to do, there is still much to be done; after a careful consideration as to the propriety of remaining for a season longer than instructed to do, I have resolved not to leave for another year to come. From what I have seen of the upper country towards the headwaters of this river [the Columbia] and the boundless track contiguous to the Rocky Mountains, I cannot in justice to the Horticultural Society's interests do otherwise."

Finally, here's an offer you don't get very often - I do slide lectures/talks on David Douglas to anyone who'll listen. No charge, just pay my expenses in getting there & back. Post a comment if interested.
Posted by Gordon Mason at 7:43 pm 2 comments: