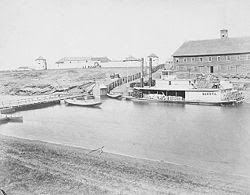 Morning cool with a heavy dew. Started at 3 AM up the river. At sunrise passed several thinly planted low houses, with small herds of cattle; humble and peasant-like as these may appear to many, to me – who have been no sharer of civilised society for a considerable time past – they impart a pleasant sensation.

At seven took breakfast two miles below the rapid, where I left my canoe and luggage to go by land.

Strangers in this quarter appear to be few; scarcely a house I passed without an invitation to enter, more particularly from the Scottish settlers who no doubt judging from coat [of Stewart tartan] imagined me a son from the bleak dreary mountains of Scotland. Had many questions put to me regarding the country, which now they only see through ideal recollection [being part of the great Scots diaspora to North America]. They appear to live comfortable and have the means of subsistence by little exertion.

About a mile further on passed a large windmill, from which Fort Garry appeared, situated to the junction of Assiniboine Ro
River with the Red River [This is the Forks area, right at the heart of modern-day Winnipeg] among some wide-spreading oaks, and on the opposite side the Roman Catholic Church and Mission establishment. [Photo above is from 1870, not 1827!!]

Called at Fort Garry and presented myself to Donald McKenzie Esq., the Governor of the colony who received me with great kindness. While a basin of tea was preparing at my request, a large tureen of fine milk was placed on the table, which I found excellent.

Mr McKenzie’s conversation to me is the more acceptable from the intimate knowledge he possess of the country west of the Rocky Mountains. In 1819 he ascended the Missouri River and crossed the continent to the mouth of the Columbia with an American party; was the companions of Messrs Nuttall [another plant collector] & Bradbury as far as they accompanied the expedition up the former river.

He has travelled largely through the country south of the Columbia, in the interior, behind the Spanish settlements [in modern-day California] and like all who share in such undertakings, shared in the fatigues and hardships attendant on these expeditions. But his was more than usual, being the first [non-Indian!] who ventured on these untrodden wilds.

He has since recrossed by the Columbia route. Had a visit paid me by Spokane Garry, an Indian boy, native of the Columbia, who is receiving his education at the Missionary school. He came to enquire of his father and brothers, who I saw; he speaks good English; his mother tongue (Spokane) he has nearly forgotten.
Posted by Gordon Mason at 5:52 pm No comments:

Catching up with Mr Douglas

Early in the morning had a large fire made for drying paper and had all my plants changed [to new drying papers for plant specimens] before breakfast. Wrote a short letter to Governor Clinton [of New York State, who Douglas had met extensively 4 years earlier], saying I should sail from Hudson’s Bay for England.

Requested the favour of hiring a small canoe to carry me to Red River. The Indians being camped a considerable distance from the place and all at this season being much engaged, I had hired for me a [French] Canadian, who agreed to carry me for the sum of four dollars and his food. Saw that his canoe was in repair in the course of the evening and made preparations for starting in the morning.

High winds during the night and morning from the lake; delayed until ten o’clock, the swell being too heavy for such a small canoe. Being provided with provisions for myself and my man I took my leave and descended the river to the lake. The lake at this season being high nothing worthy of notice occurred [!]; saw no plants; observed flocks of [now extinct] passenger pigeons. [Wish my damn pigeons were extinct] Camped at dusk on a gravely beach; was visited by some Indians, of whom I purchased some birch bark for my specimens.

Embarked at six o’clock. At ten came to a low projecting point, made myself some breakfast, overhauled the new-laid-in plants and took a short turn in the woods. Unable to paddle any further myself, yesterday’s labours having put both my hands in sheets of blisters [ouch!]

Much annoyed during the forepart of the night by mosquitoes.
Posted by Gordon Mason at 9:36 pm No comments:

Could have been worse....
.... at least there weren't any tigers lurking in the long grass. But there is certainly plenty of that. 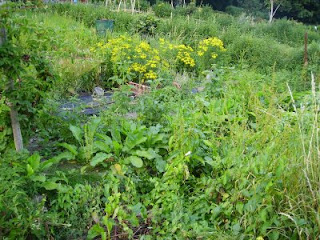 I'm paying the price of: 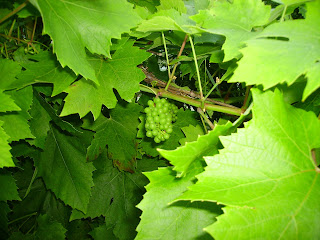 Posted by Gordon Mason at 9:23 pm No comments:

Stared at 6am and passed several high limestone cliffs. Took breakfast on a low sandy shore where, in small still waters there was abundance of Utricularia in blossom.

Remained on shore an hour and then proceeded for 12 or 14 miles when a stay was made for changing linen [to smarten up for arrival at the Fort].

Arrived at the establishment on the River Winnipeg (Fort Alexander), the Riviera of the voyageurs. We were welcomed there by Mr John McDonald, a brother of the person who crossed the Rocky Mountains last autumn, on his way to Canada [what was then known as Upper Canada and today is the Niagara/Great Lakes area]. Became acquainted with the Rev Mr Picard [Jean-Luc?] of the Roman Catholic Mission at Red River, on his way to Canada.
---------------------
Wikipedia tells us - Fort Alexander is a community in Manitoba, Canada, located on the Sagkeeng First Nation, on the south bank of the Winnipeg River. The Sagkeeng area, or the mouth of the Winnipeg River, was originally settled with native camps used for fishing, hunting, and trade. During the fur trade era, La Vérendrye built a trading post, named Fort Maurepas, on the north side of the river; this post was abandoned near the end of the French period. In the year 1792, a clerk for the North West Company, Toussaint Lesieur, built a post on the south side, which became an important provisioning post for the canoe brigades. Bags of pemmican, brought from the North West Company's posts on the upper Assiniboine, were stored here and taken as needed by the canoe brigades passing between Grand Portage (later, Fort William) and the far northwest. This post was usually referred to as Bas de la Rivière, because of its location at the bottom of Winnipeg River, and it seems to have functioned as the capital of the Company's Lake Winnipeg district. The Hudson's Bay Company operated its own post here for a few years between 1795 and 1801. In 1807, the North West Company partner Alexander Mackay rebuilt the post on a nearby site. Beginning in 1808, the new post was known as Fort Alexander. After the Northwest and Hudson's Bay Companies merged in 1821, Fort Alexander was operated as a trading post for the natives in the region.
Posted by Gordon Mason at 9:36 pm No comments:

Email ThisBlogThis!Share to TwitterShare to FacebookShare to Pinterest
Rough weather on Lake Winnipeg

Loud wind last night which increased so much towards midnight that the tent was nearly blown down; and the rain beating in on us. While the Captain supported the poles on the inside, the Doctor and I went in search of large stones to lay on the sides, being as I observed camped on a rock and pegs of no use. Before we had accomplished this we were well drenched, and as the fire was washed out each crept under his blankets until day.

In the grey of the morn it moderated and we proceeded at 5am and went on for four hours, when a strong head wind and a heavy surge obliged the canoe to take shelter a second time. At three o’clock the wind eased and the lake being calm we resumed and camped at dark on a small island near Pigeon River.

Had a fine camp last night; preferred sleeping on the rock close by the fire, where there was a fanning breeze, than to be annoyed by mosquitoes. Morning windy, obliged to put in a second time into a small muddy creek. Shore low and marshy.

Started at 5am and went on until none, when the wind increased so much that we could no longer proceed, although the lake here is not more than three and a half miles broad. The waves were heavy and broke with great violence on the shores, which are white limestone. No alteration of the conditions throughout the day. Annoyed by the smoke while engaged drying paper [the paper he used for pressing botanical specimens], the wind blowing with great violence.
Posted by Gordon Mason at 9:28 pm No comments:

Woody's alter ego, Frutti di Bosco, has been to Sardinia for a week. Bosco, as he is affectionately known, had a great time doing really very little. Temperatures of 33C don't exactly inspire a chap to look much beyond the next cool drink on the terrace, don't y' know. 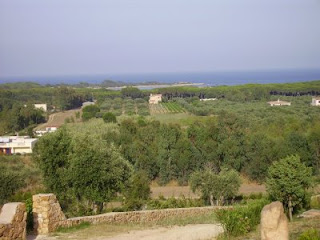 Well, somebody has to do it and it was a sight better than cold, wet, miserable Sheffield.
Catching up on David (Bosco) Douglas, back in 1827, shortly.
Posted by Gordon Mason at 9:23 pm 1 comment:

You'll remember the completely ineffective repeller tape which didn't deter pigeons from eating my cabbages. The company who make it have sent me an Owl to act as a deterrent. 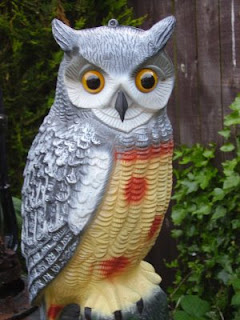 Forgive me but I don't know whether to hoot with laughter or hoot with derision.

The owl, being plastic, will of course do neither. I've already tried walking around the garden with the owl, to deter pigeons at home, and got some very funny looks from the neighbours!
Posted by Gordon Mason at 9:33 pm 1 comment:

Email ThisBlogThis!Share to TwitterShare to FacebookShare to Pinterest
On the water again, 2nd July, 1827

David Douglas has had a fortnight’s layover at Norway House, Lake Winnipeg to recover from the journey so far and to put his seed collections in order. Now he’s off to the Red River Settlement (soon I will be too).

By three o’clock everything was ready and the canoe in the water. Took under my charge a packet of letters for the Red River Settlement and a box containing Church ornaments for the Roman Catholic Bishop. Sent the Calumet [Golden] Eagle to Hudson’s Bay with a Mr Ross, wild fowl and other meat being scarce, and as he [the eagle, not Mr Ross] will not eat fish I could not keep him.

Left my sundry articles gleaned in descent of the Saskatchewan River. The roots or bulbs brought from the Columbia being still fresh and nearly dry I halved, placing one in a well-secreted place in the wood, contained in a folded piece of birch bark, fearing the mice may find them; the other in a paper bag hung up to the roof of the house.

Started at four; pleasant
Posted by Gordon Mason at 9:24 pm No comments: