I've just planted next year's Garlic, rather later than I like but still [just] this year so it can have a good dash of cod weather before planting out next spring. I'd had difficulty getting it locally but got some eventually from my old favourite Seeds of Italy. Here they all are, in the greenhouse. 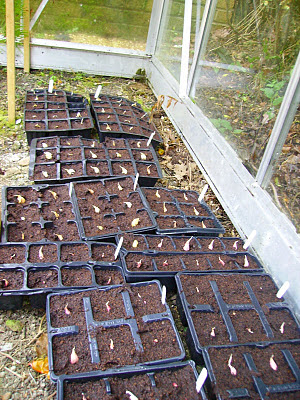 There are 105 cloves, of three different varieties. Assuming they all make a bulb and that each bulb has on average 10 cloves we're looking at 1050 cloves of garlic next year. Yummy! Vampires beware!!
Posted by Gordon Mason at 4:20 pm 2 comments:

And a Happy Xmas to you all; you’ll never get a Xmas message like that from Her Maj.

And this may, just possibly, perhaps, and all fingers and toes crossed, be the last year when it gets dark [here] at 4 o'clock. I'm supporting the Lighter Later campaign and the Daylight Saving Bill, so we can have longer, lighter evenings throughout the year. The obvious downside is darker mornings and I don't discount the effect of that. But, on balance, I'd still prefer lighter evenings.

There is a key Commons vote on 20th January. If you are at all interested in the campaign there's a link here.
Posted by Gordon Mason at 4:08 pm 4 comments:

A very sad story from long ago

The last post introduced you to Sir Joseph Dalton Hooker, botanist. Joseph had an older brother, William, born 4th April 1816. It’s a very sad story. William contracted ‘consumption’ and in 1839, aged only 23, (the same year as Joseph sets sail for the Antarctic on the Erebus voyage) William is sent off to Jamaica for the good of his health. The arrangement is that Willie will go out to Jamaica, build up his medical practice and then send for his wife, Isabella. There is family strife from Isabella’s parents who say that a young married couple should not be separated (they had only married in April 1839) and that if she stays [in Britain] they will not be responsible for her. Isabella says she will stay. Isabella is pregnant.

Quoting directly from Mea Allan’s The Hookers of Kew (wonderful title!!) “Only Isabella went to Greenock [outside Glasgow] to see him off, for these were their last hours together. The farewell was almost unbearable. Willie knew he would never see her again.”

Willie died on New Year’s Day 1840, aged only 24. The Hookers took Isabella in & she gave birth to Willielma on 6th March 1840. Isabella lived on until January 1880, never re-marrying and outliving Willielma by 6 months.

Blimey, they knew how to do tear-jerkers in those days!

Willielma married in due course and had seven children, the youngest of whom died only in 1960.

Yesterday, December 10th 2011, was the centenary of the death of one of the greatest botanists Britain has ever produced.

A long Wikipedia citation tells us that Sir Joseph Dalton Hooker was one of the greatest British botanists and exploreres of the 19th century. Darwin's closest friend, he was Director of the Royal Botanic Gardens, Kew, for twenty years, in succession to his father, Sir William Jackson Hooker.

From the age of seven Hooker attended his father's lectures at Glasgow University, where he was Regius Professor of Botany. Regular readers of this blog will know of my travels in the footsteps of another eminent botanist and plant collector, David Douglas (1799-1834). Douglas was mentored by the elder Hooker in Glasgow and in the later part of his collecting career all his collections tended to go first to Glasgow for Hooker's examination. There are many letters from Douglas to Hooker, and Douglas certainly knew the infant Joseph Dalton Hooker

The leadership of the Hookers of Kew led directly to Kew Gardens having the status and pre-eminence it enjoys today. Although burial in Westminster Abbey was offered to Sir Joseph, close to Darwin's grave, he is buried alongside his father in the churchyard of St Anne's Church on Kew Green, only a short distance from Kew Gardens.

Kew's own site also summarises Hooker's career (of course), here, and there is a further very comprehensive wesbite devoted to Hooker here.

Hope you find this interesting; all blogs need a bit of erudition from time to time!
Posted by Gordon Mason at 11:55 am No comments: