Meanwhile, down among the soft fruit.....

.....the blackberries are going great guns. 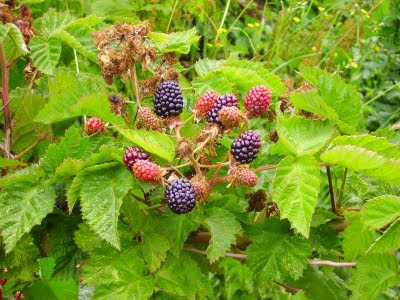 Behind the scenes the raspberries (Autumn Bliss. Actually, no they aren't; that was a reflex reaction. They're actually Joan J) are getting going. Aside, Blogger's spellchecker suggested "Behind the scones" instead of Behind the scnes. That's not bad and I do wonder sometimes whether typos have a secret life of their own

Elsewhere, both the Blackthorn and Plum trees are living proof of the benefits of shouting at them. B#gger all last year. A good shouting at during the winter = heavy crop this year. You think I'm joking don't you? The video of me shouting at them got unaccountably mislaid, but here is the undeniable result. 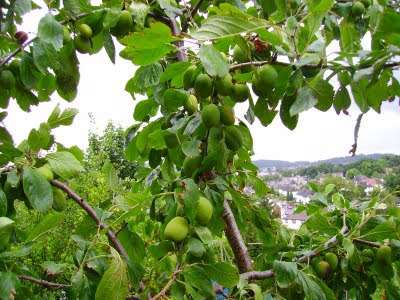 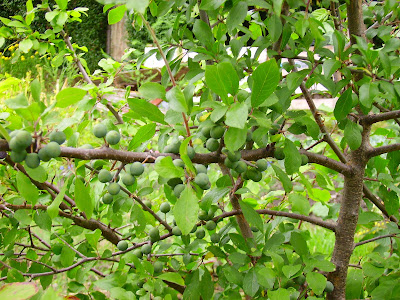 Conventional wisdom is that onions don't like competition. Shallow roots, relatively weak upperworks (ah yes, leaves, I knew it would come to me); they're easily put off their stride. And this year's onion bed has certainly given them some competition. I'm almost embarrassed to show you this. 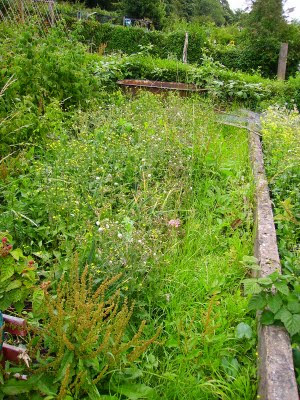 But see what lies beneath. 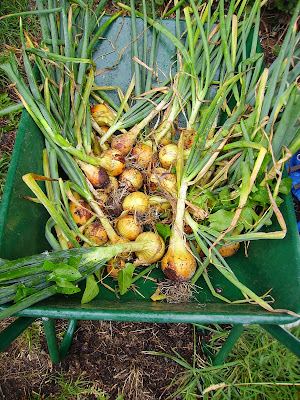 This is certainly the best onion crop I've had for the last two or three years; in fact I was on the point of giving up attempting onions because they'd been so poor. Just think what they'd be like if I'd looked after them properly!!

Meanwhile, in Fort Brassica, the netting has worked wonders in keeping pigeons off. Look at this fine specimen of a Feldenkraut 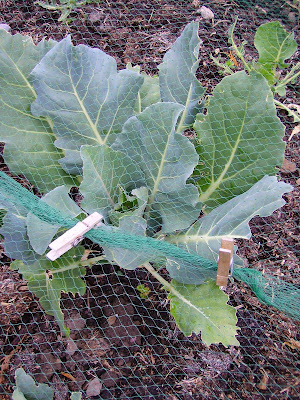 (German shredding cabbage; it'll eventually become pointy & even bigger). But right next to is this pathetic little thing 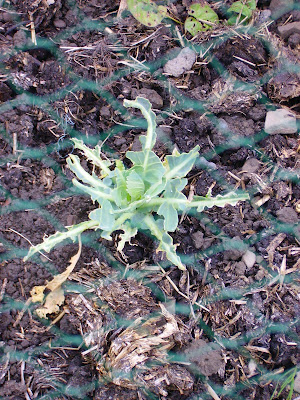 which was once a Stonehead cabbage. So what's done for that? Caterpillars of the Cabbage White butterfly, is my guess. There aren't any visible; they're probably all lying on the ground somewhere quiet clutching their bulging tums, unable to move a muscle after gorging on my cabbages.

Anyone got a sure-fire way of dealing with them?
Posted by Gordon Mason at 7:51 pm 2 comments:

...... It was the best of times, it was the worst of times; as Dickens often observed about his own allotment.

But it coulda been worse. I've harvested a decent crop of shallots and got a nice tidy [part of the] plot in return, 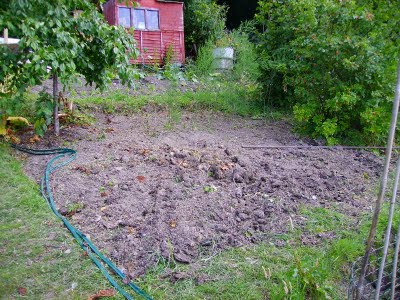 although it's bone dry. And I've got the first picking of blackberries, 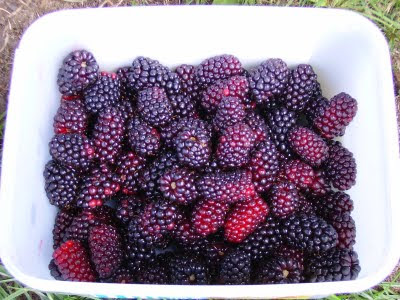 which are due to be eaten tonight with shortbread and a little cream.

The things I'm carefully not showing you, being a tad economical with the truth, are the onion bed (horrendously weedy), the salad bed (ditto), the runner beans (puny; hope the water will perk them up). And I've given up on the climbing french beans and the mangetout - the 3rd batch didn't germinate either!!
Posted by Gordon Mason at 4:55 pm 3 comments:

I have been away, sur mes vacances, tout seul dans la France profonde. Yeah, I know, again. Listen, somebody has to keep the travel trade going.

Not that this would contribute greatly, being an El-Cheapo trip to the Landes of Aquitaine, specifically to my favourite little town of Le Porge and my favourite campsite - Aire Naturelle de Lescarran. 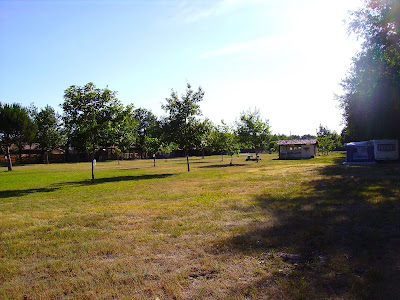 This must be the sixth time I've been there and it never changes much. Old Madame has had a stroke and Young Madame (these are relative terms, you understand) is now in charge. It still costs only threepence-three-farthing a night and the showers are still cold. It's actually €5 a night in early season (can you believe a bargain like that?) and you can get jetons to shove in a box to make the shower run warmish. But I rather like the cold showers (it's all we got in the North when I were a lad; character building), especially when the temperature is 106F.

I like to travel fairly light, as you can see, 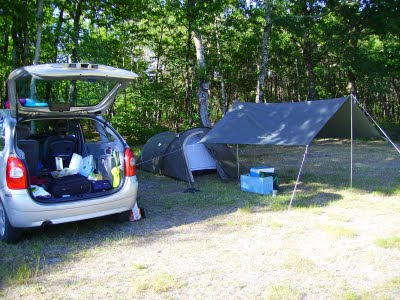 although it's possible to travel much lighter. One happy camper (quite a big bloke) arrived by bicycle with one of the tiniest tents I've ever seen. He didn't so much sleep in it as wear it.

But this has all the important elements for me - a car, a bike, a tent, a chair and a coolbox with wine, cheese etc etc. 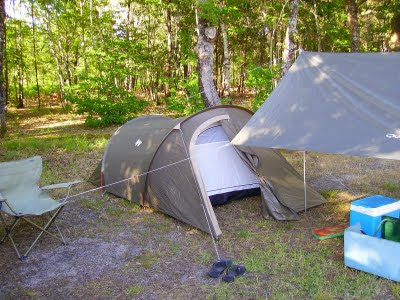 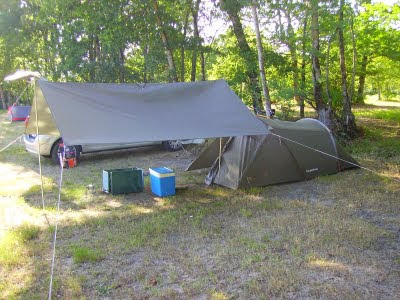 What more could a chap need?

Well, freedom from thunderstorms at 3am would be nice. It occurred to me at said 3am that lying on the ground in a thunderstorm next to two vertical metal tent poles was perhaps not the brightest or safest place to be. Although it could have turned out to be extremely bright indeed with a faint smell of singeing and roast pork if I'd stayed there much longer. So I wimped it out in the car, resting firmly on four nice big rubbery tyres while Armageddon raged overhead.

Incidentally, speaking of roast pork, the site is sometimes visited by sangliers (wild boar). I've seen them on previous visits and although I didn't see them this time others did, and I did hear them. When something large snuffles round your tent in the middle of the night and says Oink you can put money on it having a curly little tail. It behoves one to make damn sure the sausages are packed away; don't want les sanglier finding their best mates all trussed up in sausage skins and pret a manger.

I'd happily spend all summer there (and at €5 a night I could!!) but you'd all pine for news of the allotment so I guess I'll just have to buckle down to it. Next post soon.
Posted by Gordon Mason at 4:01 pm 1 comment: