As you'll perhaps recall, I'm doing some parallel blogging again this year, of the allotment in 2009 and David Douglas (botanist & plant collector extraordinaire, 1799-1834) in 1826. At that time he is at the Fort Vancouver headquarters of the Hudson's Bay Co'y in the Pacific Northwest.

To refresh the story in 2009 for new readers, I am involved in making a TV documentary on Douglas's life and achievements, with colleagues from the Oregon Cultural Heritage Commission, in the USA, and the UK Forestry Commission. Filming is almost complete in Oregon and Canada, it starts in Hawaii (sadly not with me) in February, and then we're in London and Scotland in May. A premiere is scheduled for Douglas's birthplace in Perth, as part of the Scottish Year of Homecoming, for October.

Anyway, here he is on New Year's Day 1826 clearly feeling a bit sorry for himself. A hangover perhaps?

Commencing a year in such a far removed corner of the earth, where I am nearly destitute of civilised society, there is some scope for reflection. In 1824 I was on the Atlantic on my way to England; 1825 between the island of Juan Fernandez & the Galapagos in the Pacific. I am now here and God only knows where I may be the next. In all probability, if a change does not take place, I will shortly be consigned to the tomb. I can die satisfied with myself. I never have given cause for remonstrance or pain to an individual on earth. I am in my twenty-seventh year.

Douglas is being unnecessarily gloomy here, although in fact he had only another eight years left before a grisly end on Hawaii. I've stood where he died 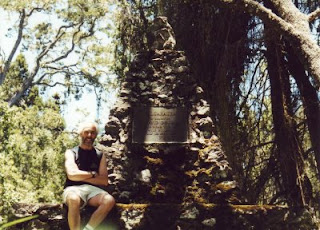 and also where he is buried in downtown Honolulu. 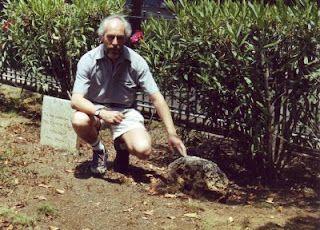 A small custom has grown up of toasting his grave with a wee dram. I did that on my visit and will be having a wee dram in his memory tonight on Burns Night. (The Memorial cairn you see behind me in the first photo was erected by the now-defunct Burns Club of Hilo, on the Big Island of Hawaii, in 1934 to commemorate the centenary of his death).
Posted by Gordon Mason at 4:49 pm No comments:

January looks like being the month of no allotment work. Here's the reason: 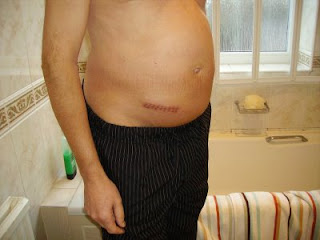 I'm not usually that porky, honest. It's bloating from the operation!
Posted by Gordon Mason at 12:32 pm 3 comments:

One of the bonuses of recovering from an appendix op is that I'm getting lots of reading done. This week I've been reading 1215 - The Year of Magna Carta by Danny Danziger & John Gillingham.

They make the point, in discussing the status of people at that time, that slavery in Britain was ended not long after the Norman conquest in 1066 and "by the 1120s Englishmen looked upon slavery as a barbarous custom happily no longer practised in their modern and civilised society".

Fast forward to 1215, when "Although a serf and his family were in effect bought and sold when the land on which he lived, his villein tenancy, was bought and sold, no individual serf was separated from his or her family and taken to market to be sold in the way that slaves - human cattle - had been. Serfs were not slaves. But they felt unfree and with reason. A long struggle lay ahead, in which the great rebellion of 1381, the Peasants Revolt, was the principal landmark, before serfdom was at last ended, although it has never been formally abolished."

Now fast forward again to 1961, at which point I am 11 years old. My father was a farm labourer living in a tied cottage which went with the job; no job = no house. The farmer, who was my mother's cousin (or perhaps uncle), decided to retire and sell the farm. He didn't trouble himself to inform or consult my mother or my father (his only employee). They found out only when they saw the farm sale advertised in the local newspaper.

The sale went ahead and my father's employment duly transferred to the new owner, who promptly decided he didn't want my father. He sacked him and moved to evict us from the house; no job = no house.

Arguably, my father could have resolved this much earlier by seeking other work. After all everyone has a common law right to choose who they work for. But no job (or perhaps different job) = no house and that's a hard decision to take when you're supporting a family.

This whole farm labourer & tied cottage arrangement for the rural poor seems to me uncomfortably close to serfdom, alive and well in 1961. I believe my father's employment status then was little better than a serf, and wonder whether I was then, almost 750 years after Magna Carta, the son of a serf?
Posted by Gordon Mason at 12:04 pm No comments:

Those of you who have followed this blog over the last couple of years will be familiar with my interest (obsession?) with the life and works of David Douglas, botanist and plant collector 1799-1834. I have followed him around the world, including to sub-arctic Canada last summer and am making a TV documentary on his life. One of my themes is that history, far from being a dry and dusty subject which happened long long ago, can be surprisingly close.

Now let me tell you about Eugenie Fraser. Born Yevgheniya Ghermanovna Scholts, in Archangel, of Russian-Scots parents she died only in 2002, aged 96, in Edinburgh. Her obituary is on Times Online and her story of her life is available on Amazon. As a newborn baby in 1905 she was taken by sledge, swaddled in furs against the Archangel winter, to the house of an old family retainer, Nanny Shalovchika. Nanny professed herself content that she had now nursed four generations of the same family.

But the point about Nanny Shalovchika is that she was 105, born in 1800. She remembered seeing Napoleon’s troops fleeing down the roads of Smolensk after the battle of Smolensk in 1812 (she was already 12!), and had a son killed in the Crimean war.

In the lives of just two people, one of whom died only six years ago, we can reach back right to 1800 (David Douglas was born in 1799). History is indeed sometimes almost close enough to touch.

More on Douglas shortly, including his own gloomy assessment of his life expectancy, back in 1826.

But for the meantime, tomorrow, was serfdom alive and well in the UK as late as 1961?

Posted by Gordon Mason at 7:35 pm No comments:

..... his recent lack of input and failure to wish you all Happy New Year etc.

Sadly, I have been hors de combat (and count myself lucky not to have been turned into an old horse de combat and made into pies)

Anyway, at the very end of a long and increasingly painful day, acute appendicitis was confirmed and my about-to-perforate appendix and I went our separate ways. It's fair to say that neither us will be hoping for a reconciliation.

I'm currently stapled together in the lower abdomen and off work for a month. I've been having a whole host of VERY weird morphine-related hallucinations but they seem to be ebbing away now and I'm beginning to keep food down. Allotmenting remains a distant prospect at present.
Posted by Gordon Mason at 4:08 pm 3 comments: