I mentioned in my post on August 23rd that a polar bear had walked around the building we were filming in in Northern Manitoba just two days before we got there.

And here he is, doing just that. 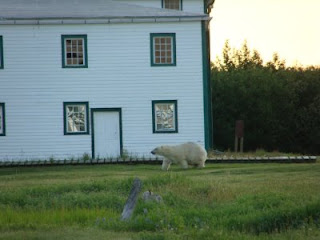 It was Forty Years Ago today

Well, more or less. I came to Sheffield as an 18 year old student in October 1968, and never left. Here I still am. Until two years ago I hadn’t lived more than a mile in any direction from where I lived when I first came to Sheffield. One of the main roads into & out of Sheffield is West Street and I’ve spent my entire career, in various different jobs in the University and Civil Service, within a mile of West Street. If I were a sheep I’d be “hefted to my hill”. I’ve sometimes thought of myself like that.

Sounds boring doesn’t it. And yet, and yet…. It doesn’t feel that way. Sheffield is where I met my wife, married, raised two children, had two allotments and used as a springboard for piles of interesting journeys. We thought hard about leaving entirely when the place sank into a slough of despond in the 90’s. Sheffield has a massive chip on its shoulder about not being Leeds, the regional capital. In the aftermath of the end of the steel industry that caused a “nobody loves us, everybody hates us, we’re going down the garden to eat worms” attitude. But it never will be the regional capital and has now, thankfully, reinvigorated itself and carved/is carving a different identity altogether.

None of that has anything to do with allotmentaria but I thought you’d want to know. If you don’t, well I’ve told you anyway!!

As for the allotment, it’s looking much better now. 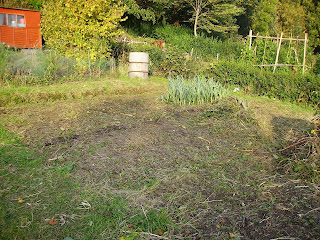 I had a massive strimming session today so most of it now looks halfway tidy. There’s more to do of course and I need to get some manure delivered so I can spend a happy weekend shovelling.......
Posted by Gordon Mason at 8:39 pm 2 comments: