Who turned the fan off?
That's what it was like, someone turning a fan off. It was really windy on the allotment this morning; stuff blowing away, having to have bricks put on it, howling in the trees, too windy to have a bonfire, that sort of thing. Then at 20 past 2 it stopped. Just like that, it stopped, as though someone had switched a fan off.
It felt like what I imagine it's like when the eye of a hurricane passes over. So now I'm waiting for it to start again but in the opposite direction!
Notwithstanding the wind (so to speak) I got loads done today. The side path is now clear and tidy, ready to be kept down with the strimmer, the hedge is cut, I've two huge piles of stuff ready for bonfires. I've manured the blackberries (IDEA - put some netting over them this year to stop Mester Nutkins scoffing them all before I can get to them). Mester - a Sheffield word, derived from Mr and normally applied to a craftsman. Sheffield's iconic silverware & cutlery trade was based on hundreds of Little Mesters working in craft workshops all around the city. Now they're mostly in museums. It's also in general use in Sheffield as a general purpose word for a bloke.
There now, you come to a blog about allotments and get some etymological culture about Sheffield blokes, as related to Squirrel Nutkins.
But I digress. I've also dug and manured half of plot 4 and painted the shed with lovely brown jollop. 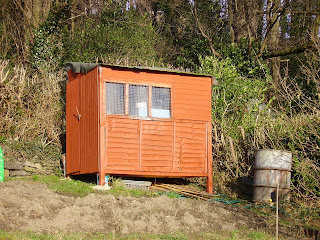 It's been a positive hive of activity. Ivan-next-door was there and busy, as was bloke-next-to-Ivan, along with woman-below-Ivan (steady on) and woman-below-bloke-next-to-Ivan. And you used to think allotmenting was a wholesome activity?
And now for a historical perspective. It's 3 and a half years since I took this plot over so it's worth looking at:
how it was 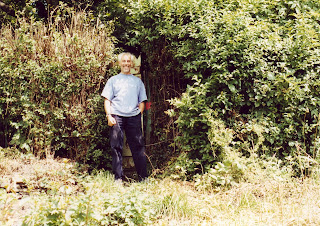 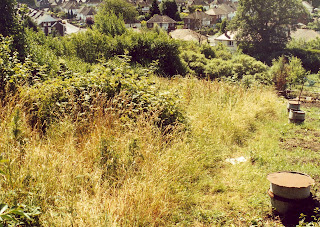 and how it is 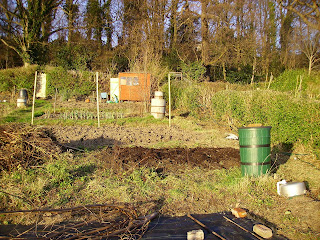 courtesy of a horny-handed son of toil.
Posted by Gordon Mason at 5:14 pm 6 comments:

Stirrings and Strimmings
Signs of life! Rhubarb is beginning to emerge 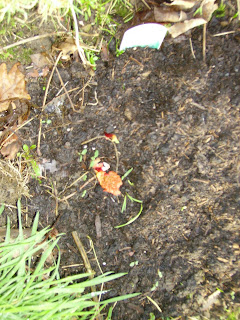 and so is the garlic 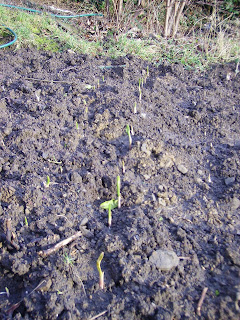 And it is unmistakably getting lighter. Which, time marching on, means I really need to get on with the 2 sub-plots I'm going to leave fallow this year. Sounds a bit pretentious I know, with echoes of Turnip Townsend and his three-course rotation but I just need to cut down the amount of plot I'm not cultivating very well, in the hope of doing the rest of it better.
So I've strimmed all the lush, wet, soft, weed growth off it (wearing safety specs, but when I took them off had a massive white band across an otherwise filthy face), so it looks pretty tidy: 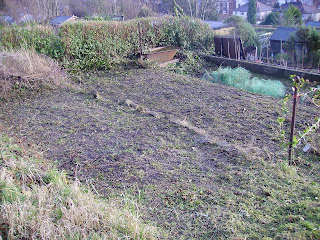 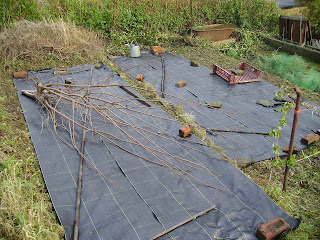 Well, it's a good plan; let's see how it goes. I've also started planning the layout for this year and am trying to grow less quantity but better (better-grown, sturdier) quality plants. And I've two more Resolutiones:
And, changing the subject totally, I've bought a motorcycle, for a cunning plan which is well advanced and will be revealed in a sub-blog later. Pictures when it arrives, in a couple of weeks. Hasta la Vista, baby.
Posted by Gordon Mason at 4:50 pm 3 comments:

..... pretty much sums it up really!
but at least I got to the allotment. Managed to cut down 3 saplings in the hedge and cleared one WL's worth (translation - a new unit of measurement, the Woody's Length, approx 6 feet) of undergrowth. Picture beneath - see what I mean about boring?! 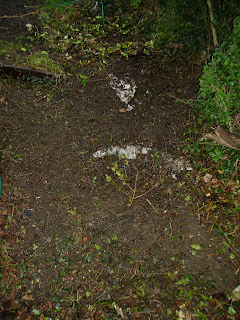 Meanwhile back on the plot

on a glorious cold bright day with lots of sunshine. Perfect digging weather really; soft underneath from rain last week but not clarty (a good Northern word) on the boots and with a good drying wind. 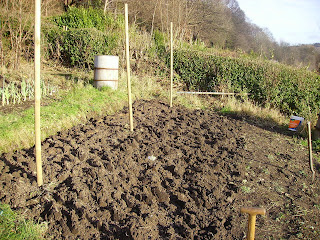 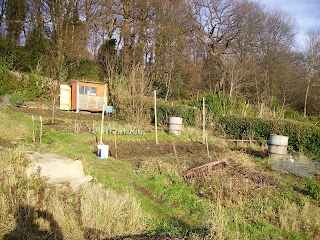 Email ThisBlogThis!Share to TwitterShare to FacebookShare to Pinterest
Arcadia..... 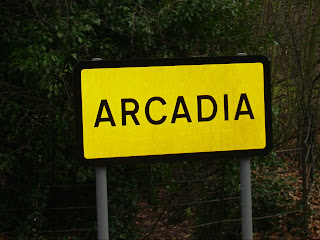 ...is where I've been, aka Yorkshire Sculpture Park, to catch the penultimate day of the Antony Gormley exhibition. I'm a great fan of Gormley and have seen his work:
Most of the stuff was inside and photography not allowed but I found this outside 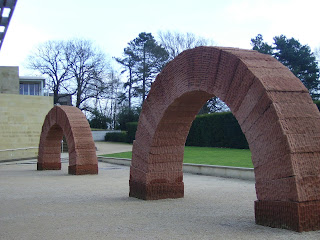 and plenty of other stuff, 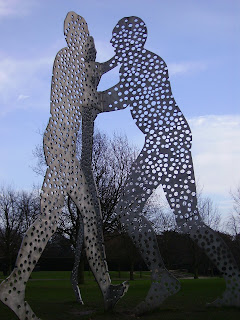 including lots of Elizabeth Frink. 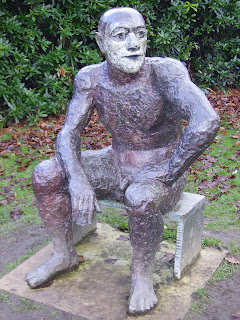 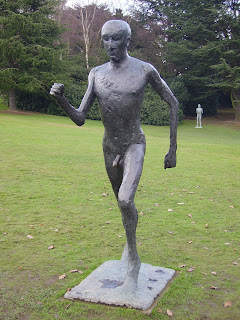 I do like a good Frink
Posted by Gordon Mason at 8:06 pm No comments:

Resolution for the Year

Never walk past a weed

Well, ya gotta be aspirational ain't cha
Posted by Gordon Mason at 9:11 pm No comments:

and Happy New Year too.

There's something symbolic about planting something on New Year's Day, especially if it's garlic which needs a cold period to perform properly (today's test - give me the proper name for that cold period. Marks out of 10 for prompt response and bonus points for spelling it correctly). 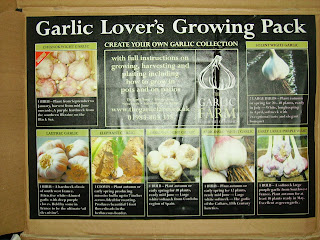 I planted 70 cloves of various garlics from The Garlic Farm on the Isle of Wight http://www.thegarlicfarm.co.uk/ and 4 cloves of elephant garlic. Last year's garlic was very poor so I'm looking forward to a better crop from better stock - some of the cloves are huge.

Then came home and had a heart-starter (double espresso & a shot of Calvados). Yummy.

This morning we went to see The Golden Compass, with lots of armoured bears on Svalbard. I was going to make a cheap crack about "Not much gardening on Svalbard", but have a look at this:

Best wishes for a good year