BBC News has been running a feature where visitors to the website are asked to share their outlook for the year ahead in three words.

Let's have a go, with an allotment or gardening theme. I'll start with:

Contributions welcome; keep them coming. Let's be 'aving you (Digression - there's a road in Sheffield called Letsby Avenue, on which the police traffic headquarters is based. I kid you not.)
Posted by Gordon Mason at 8:16 pm 10 comments:

The Mattock is a splendid Tool

I have three garden tools which I'd greatly miss if I lost them, and only one of which I paid for.

The first is my Dad's "Bulldog" spade, which I inherited when he died

The second is an equally good quality fork, with nice sharp tines. This fork was left behind in a shed on an allotment I used to work long ago and it sort of adopted me.

And the third, which I did pay for, is my much-loved Mattock. Here's a picture of it. 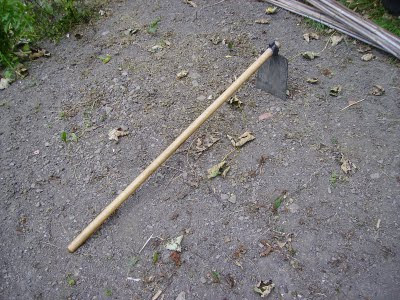 It goes with me every time I go to the allotment, but it never spends the night there. Nor do the others.

It's a very old design, used by peasant farmers around the world. They know a thing or two, they peasant farmers. There's nothing like it for clearing ground, short of Agent Orange which I might find hard to get hold of and a tad toxic.

The Great Autumn Tidy being in full swing, the Mattock is getting lots of use.
Posted by Gordon Mason at 8:02 pm 8 comments:

The first visit since the last visit.....

.... has revealed a plot in dire need of TLC. That's what happens when you go gallivanting up Austrian mountains and leave yer vegetables to look after themselves. Hey Ho.

Anyway, the Great Autumn Tidy has started, with the aid of the trusty Mattock. I'd show you a picture of me looking pleased with myself but it's a shirt-off job and I don't want to frighten the 'orses.

So here's a picture of two disgracefully knobby Italian courgettes. 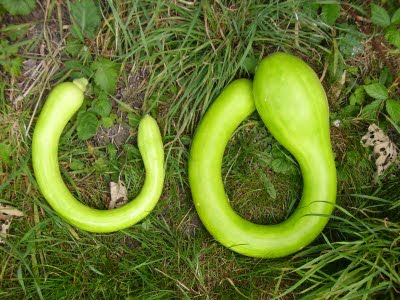 Their proper name is Trompetti, courtesy of the excellent Seeds of Italy, but in our house they're known as Knobby & Bobby.
Posted by Gordon Mason at 8:20 pm 2 comments:

Radio silence over the last week cos I've been to Austria on Chaps Week. Five good days = five good mountains. And food; ye gods, they Austrians like their meat. It's no place for vegetarians; think I ate more meat on the first night than in the whole of the previous week. If offered a Grillteller, first loosen your belt a couple of notches.

These are the geraniums outside a mountain hut where we stopped for a Zipfer. 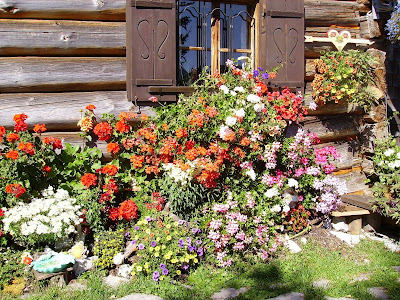 There are fabulous cascading geraniums everywhere. Climate makes a difference of course; being so much further inland they get a reliably warm dry summer. Dream on, UK.

Anyway, here's a sample of the mountains we got up (note the ladder on one of them) 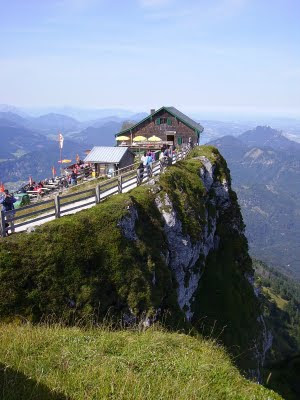 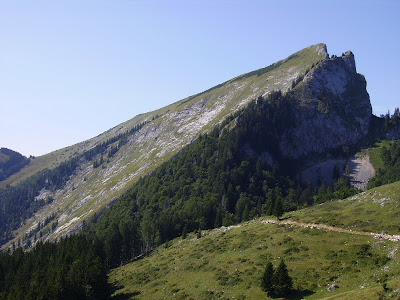 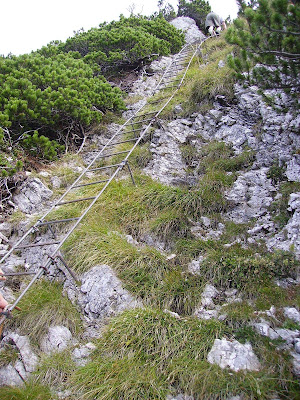 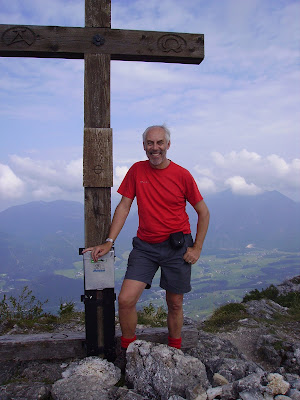 Then it rained so we went down a salt mine (no pictures cos I forgot the camera). Had to slide into it; the further back you leaned the faster you went. I managed 29.6 Km/h. Poor, but did have friction burns on undercarriage.
Posted by Gordon Mason at 8:36 pm 3 comments: