Where do I come from?

No, that's not the question which usually ends in "Mummy?". I worked that one out a long time ago.

Rather, it's about where do I feel I belong. If I were a sheep, which bit of hill do I feel hefted to? If I were French, where is my terroir? And the truth of the matter is that I don't really feel I know, any more.

Crikey, matey, I hear you say; what's brought on this bout of introspection (and why is it in a blog about allotments, for goodness sake; keep yer pretentious tosh for somewhere else!).

It's because today I've been to a funeral, of my friend Billy. I find funerals difficult & I was quite upset by this one, in a manly sort of way. I confess I had to pull over on the way home because I couldn't see to drive. The stiff upper lip has had a definite quiver today.

Billy was a well travelled man but unmistakably rooted in the Northeast. We are of a similar vintage and come from small towns only 20 miles apart. I was born and raised in the south-west Durham coalfield, but feel no attachment to it. I left the Northeast at age 18 and never really went back.

I've lived in Sheffield for over 40 years but ask me whether I'm a Sheffielder and I think the answer is No. I wasn't born here and don't have that inbuilt identity. And if you ask me whether I'm a Yorkshireman the answer is emphatically No. I recoil from that slightly synthetic, slightly jingoistic, assertion of [it seems to me] slightly false identity. I do feel a pull towards the Durham Dales (Weardale & Teesdale) but not sufficiently to want to live there.

So which hill am I hefted to? Well, that's partly about the pull of the allotment. If you ask me why I have an allotment it's only partly about growing things, outdoor exercise, fresh food etc, although all of those are important. A lot of it is about land; it's my land. Subject to only fairly light touch regulation I can do what I like on my small patch of land. My inner peasant isn't far from the surface.

So if you ask me about my identity, what I am, where I come from - what do I say? Quite often I say I'm a European. I do feel something of a supra-national identity, although I've never lived in any other country than the UK and am now unlikely to ever do so. I don't think of myself as English, although I am, but quite like the inherent diversity of British. Driving down the motorway today I coined the identity of a Modern Briton but aren't quite sure what it means. If that were an exam question it would be followed by "Discuss".

To get you started here is a plaque you can find close by the Rockefeller Centre, New York. 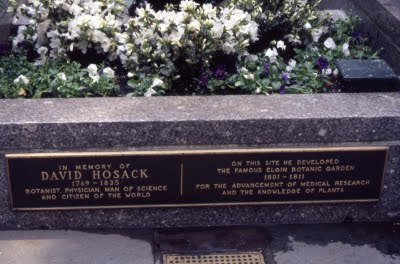 Today was the first 'working' visit to the plot for a month and in a packed programme Woodsworth managed to:


The onions I put in a month or so ago are showing reasonably well and the garlic is beginning to show signs of life. I'm always a bit dubious about autumn onions but other people seem to do well with them so it's worth a try.
Posted by Gordon Mason at 5:33 pm 1 comment:

I seem to have done it myself!!

I'll have to set my own challenge now.
Posted by Gordon Mason at 9:38 pm 5 comments:

Whoever the 8000th visitor is, please identify yourself and set me an allotmenting challenge.
Posted by Gordon Mason at 9:36 pm No comments:

Apologies for tardiness in updating y'all on "Finding David Douglas", which premiered at Pitlochry Festival Theatre last Thursday. Thanks to Gnome for pricking my conscience.

Well, what a night we had of it; I'm sorry you couldn't make it, Gnome. I think you'd have enjoyed it.

We had 300 people in the theatre, a reception, an address from the Provost of Perth, the Scottish Environment Minister was there, and we had a rousing chorus or several of "To the Oregon Country" (last heard on an island in the Hayes River, northern Manitoba). Oh and a damn good film launch.

The film was excellent. I hadn't seen it before the premiere and am well pleased with it. I know I would say that wouldn't I but I think it is a good piece of storytelling (with lots of on-screen from yours truly!!). There are some technical faults with it yet; it's a bit too long at an hour & eight mins and needs to lose around 12 mins to make it more broadcastable; some of the maps are a bit overexposed and don't add a lot to the story, and some of the running order needs tweaking to tell the story more clearly.

But we positioned it as what it is - a work in progress. All those issues will be ironed out over the winter ready for the US launch in April. For the moment we're very proud of it.
Posted by Gordon Mason at 9:35 pm 6 comments:

Frustration may cause Accidents.....

.....said the big illuminated sign beside the A1 on our recent trip to Scotland.

"Aye; better have a w*nk" came the cry from the Wilburys, passing by.
Posted by Gordon Mason at 9:29 pm No comments: