Well, it's changed it's mind this year. 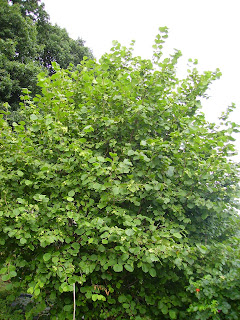 Quite the heaviest crop of hazelnuts it's ever had. Nuts, whole Hazelnuts. Cadbury's took me and they covered me in Chocolate. Come on, sing along. 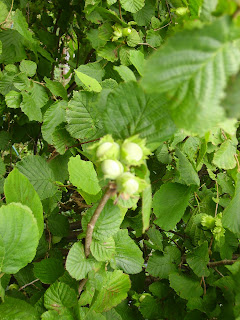 But who'll get there first, me or old Nutkins? My money is on Nutkins. And I'm still going to coppice it next year because it's getting too big.

What else is going on? I spent a few minutes standing in front of a brushcutter (with a blade) in B&Q before deciding that, good though it was, I couldn't justify spending almost £200 on it when I had a "reasonable" (plastic line) petrol powered strimmer. And I was slightly worried about cutting my feet off. So I went back to the strimmer and strummed merrily away to make a tidyish allotment. The trick to it is to a) do it more often so you aren't dealing with grass which is too long, and b) pre-cut the lengths of line (they just push in) so that when they need changing (frequently!) you can do it really quickly.

Well, that was fun. A good proportion of the strimmage ended up on my trousers, which now stand up by themselves. No pictures cos who wants to see pictures of cut grass stiffening my trouser legs? There are websites for that sort of thing, allegedly. But let's have a flower theme for a moment. 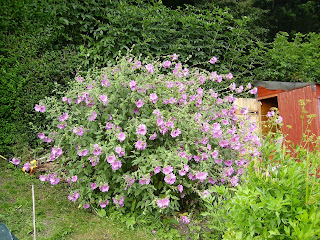 The Cornflower (yes, I know it's the wrong way round): 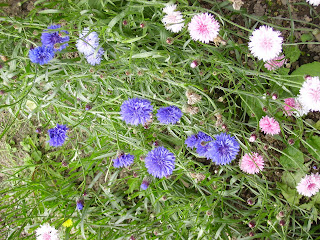 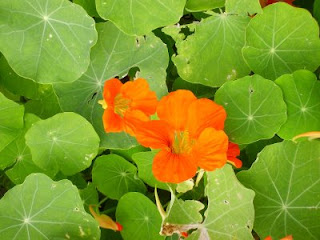 Meanwhile, back at the potting bench, I've been addressing my bete noire, of failing to do successional sowing to extend the season. So this wet, miserably wet, Sunday afternoon (Memo to weather - Errm , this is summer, actually. Let's have some) I've sown Lettuce (red cos & red salad bowl) - I like red lettuce, mangetout, rocket, spicygreens, cavalo di bruxelles (or sprouts, as they're called round here), red cabbage, caulipretties (as my sister-in-law called them when she was a toddler) & savoy cabbage (a bit late but worth a try). Must try to get some cavalo nero, black Italian kale, in too.
Posted by Gordon Mason at 4:56 pm 1 comment:

And so, at last, an update

Back from hols, back to work tomorrow; so how's it been with the allotment while we were in Crete?

30C heat for a few days I gather but also torrential downpours. That has a predictable effect on the weeds! But overall it isn't looking too bad. I'd give it 6/10, after two weeks total neglect. In detail:

Blackberries - doing VERY well. Himalayan Giant are prolific & huge (the clue is in the name?) but v thorny. Oregon Thornless are smooth (!) and have a heavy crop but they ripen later so aren't ready yet. 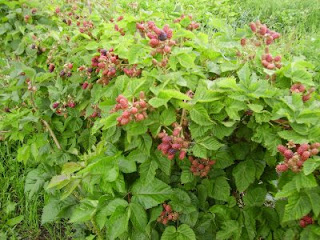 Raspberries - the earlies seem to have peaked while we've been away, with signs of pigeon damage, and the lates aren't ready yet (come on lads, get on with it).

Blackcurrant bush - well, it's still there but isn't doing much.

Salads - beginning to bolt but will still get a few pickings then need to resow for more later.

Onions & Shallots - disappointing - I'm doing something fundamentally wrong with my onions (he squeaked, painfully). Too much competition from weeds I think. Need to rethink them for next year. 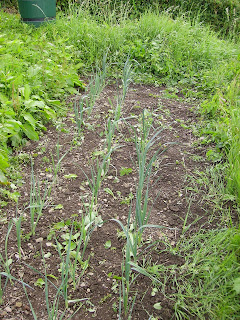 Brassicas - red & ordinary cabbage doing well in Fort Brassica but it needs better access for weeding. At present it looks like Thistletown. The hurdles are good at keeping they pigeons out but I need to rethink the fixings and the roof for better access. All this for a few cabbages.

Climbing French - OK but need to get up their poles more (Allez! Montant!!)

Spuds - amazed that I've got any; they're all volunteers from last year.

Plums - hanging on, altho some have clearly dropped as there aren't as many as before hols. But we may actually get some ripe ones this year. 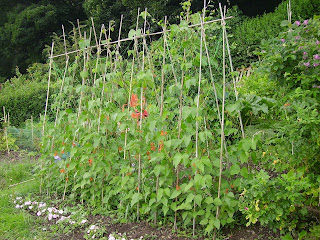 Rhubarb - seems to be having a second coming. (Hmm.... No good'll come of it; ee mark my words)

Hazel - needs coppicing in the autumn. Ee, that our Hazel, she's a right un; always needs a good coppicing 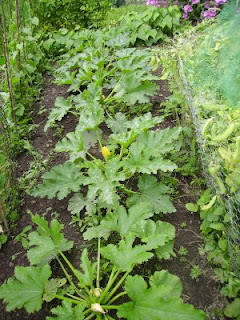 We had fried Courgettes in Crete - actually we had lots of different versions but the ones we liked best were very thinly sliced, dipped in a light batter & then flash fried as a starter. Yummy.

Cucumbers - still alive (x2) but not fruiting yet. Come on lads; I'm looking forward to my Burpless Tasty Green

Sweet Peas, Cornflowers & Morning Glory - all OK but looking a bit 'thin'. The whole plot needs a good feed. Bring on the manure in the autumn. But at least the Morning Glory 'wall' shows signs of delivering on the idea.

Flowering Mallow (Lavatera) - totally OTT as usual, and determined to fall over like the blowsy old tart it is. 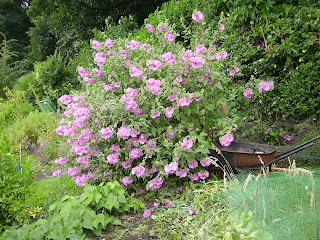 It's going to have to come out in the autumn because it's where the manure is going to go. But it makes such a good show I'll have to put another in somewhere else. 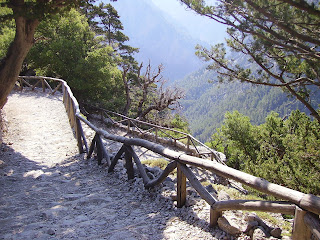 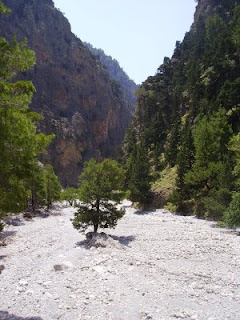 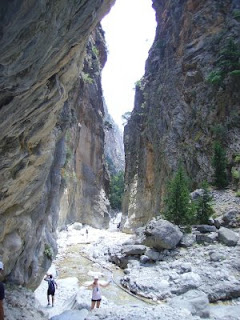 and somehow the fact of it being mostly downhill 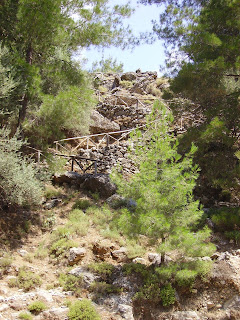 doesn't make it any easier, especially in the light of this sign. 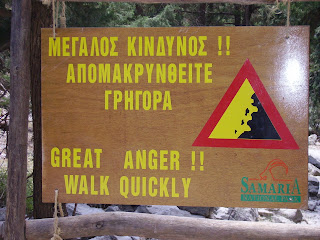 By the end my right knee was twanging. I suspected the cure to be lashings of ice-cold beer but was unsure whether to rub it on or apply internally. Dr Son and Dr Brother-in-Law quickly advised by text that I should immediately apply internally and, if no improvement, repeat quickly until feeling no pain. That did the trick.
Posted by Gordon Mason at 5:10 pm 4 comments:

..... is in Crete (I wish), hence the radio silence for the last fortnight. Here's a photo. 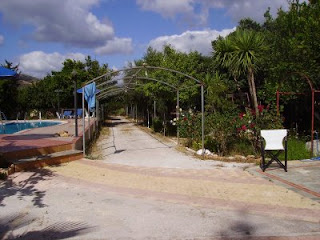 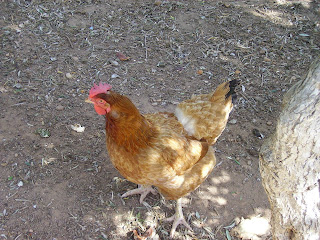 and rabbits there too, along with the usual civilised comforts of a pool 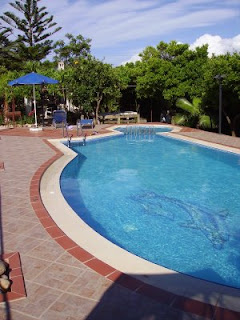 The pool attracted lots of frogs at night (noisy little beggars they are); lizards live in the walls and come out to hunt moths, and owls come out to hunt mice etc.
And of course there's always the delights of PYO oranges. 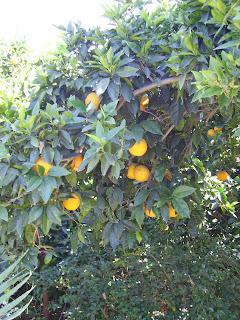 This was all followed by a flight into Manchester last night in torrential rain (perhaps a tautology?) and a drive over the Snake Pass with roads awash. Never seen such torrents of water. I gather you had it hot in the UK while we were in Crete but there was no evidence of it last night!!
Posted by Gordon Mason at 4:45 pm No comments: