Finally cleared the garage of old-kitchen rubbish, with a mere five "car stuffed to the roof" trips.

Finally got the AGM of our Churchill Fellows Association out of the way (William Hague as guest speaker and a really good event. V pleased).

At last I can get on with catching up with greatly neglected seed sowing.

So this day I are mostly been sowing:

And potted on a mere 30 tomato plants - 15 Tamina and 15 Moneymaker. I've got some Gardeners Delight (isn't that called beer?) and San Marzano Plum coming along too but they're a bit scraggy because they got a touch of frost nip.

And finally, planted a Lavatera at the plot and one at the house so we can have synchronised flowering. Aah!

Yer Brassicas, which are miles behind
Yer leafy vegetables (spinach and beetroot; yes, beetroot, I know but it is quite leafy!)
Yer Flowers.

Next weekend with a bit of luck.

Posted by Gordon Mason at 8:43 pm No comments:

Mouse in mi teabags, what mi gonna do?
Something of a conflict of interest in the shed today. Old Mousey, sitting on the workbench waiting for me today, clearly thinks he owns the shed. Given that he's been there more than me just lately he has a point. But making a nest in my box of teabags is going a bit far.
Did all those Chocolate Oranges i left him count for nothing? He'll be turning his nose up at ordinary Sainsbury's tea next and asking for Earl Grey or, heaven forfend, a nice bit of Lapsang Souchong for him and Mrs Mousey. And probably cucumber sandwiches too (he'll have to wait a bit for those; haven't even sown the seeds yet).
Well listen up, Mousey; this is taking liberties. From next week the teabags are in a tin; a tin tin, ideally with a picture of Tintin on it, innit? Let's see you blunt your mousey teeth on that, matey. Teabags indeed.
Digressing into Sheffield dialect for a moment, the only possible conclusion to an exchange like:
It's in the tin
No it isn't
Yes it is
No it isn't
is
'tin't in tin
Any road up, as they say in this northern enclave of blogland, allotment life has been very quiet lately (unless you're a Mouse), due to the massive diversion of having a new kitchen installed. No, not at the allotment. I've done enough for that mouse already. Before and after pictures below - I know you couldn't give a stuff really but we're proud of it. 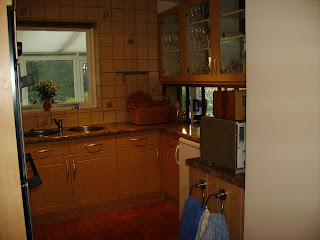 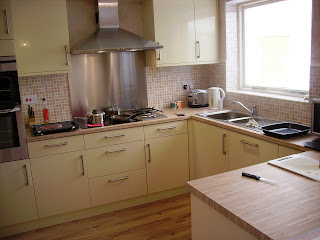 On the plot, the onion sets have come alive, lord knows how cos there hasn't been a drop of rain since I put them in 3 weeks ago. But alive they are. Spuds in too - row and half of Charlotte and half a row of Nicola. King Edward's take up too much time and space and as for Prince Albert, let's not go there.
So, it being dry and all, I got the hose out and watered the onions, topped up the baths etc and naturally it started to rain. I am rain god. The baths are v useful for soaking the wooden stool. The weather has been so dry that all its joints have dried out and it's fallen apart. A couple of days in the bath and it'll be fine. Know how it feels.
Posted by Gordon Mason at 7:21 pm 6 comments:

I spent last Wednesday at an RHS Study Day on the life and works of EH "Chinese" Wilson, another of my plant collecting heroes, second only to David Douglas. Look him up on Google for more info but this is the man:

As you would guess Chinese got his nickname because of where he did the bulk of his collecting, and he was prolific. The most spectacular is Davidia involucrata (the handkerchief tree but he is credited with literally thousands of others. Travelled hard in difficult country and had a horrendous accident crossing a scree slope, which almost cost him his leg and his life.

The Study Day was classic curate's egg - good in parts. When it dealt with the man and his travels it was first class. When it dealt with his plants it amounted to trainspotting for rhododendrons, and Ye Gods, the audience were a load of buffers (present company excepted of course!). I'm sorry to admit that I fell asleep in one of the duller parts.
Posted by Gordon Mason at 9:10 pm 3 comments:

Email ThisBlogThis!Share to TwitterShare to FacebookShare to Pinterest
Simply the Best.....

....manure is well-rotted horse manure. Three big bags of it so far, from my free supply in the woods, through the holly bush and over the rickety bridge (no trolls, at least none I can see).

And the allotment is OK, a bit dry in glorious sunshine but my pathetic plum tree is finally flowering

and the garlic continues to roar away.

Two-Sheds
Devotees of early Monty Python will recall Arthur "Two-sheds" Jackson, who in fact did not have two sheds but was only considering a second shed.
Dear Reader, I have gone better - I am now Two Sheds. My rude hut at home now supplements a ruder hut at the allotment and rejoices in the title you see below. 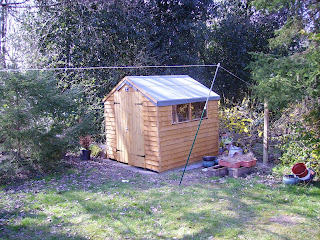 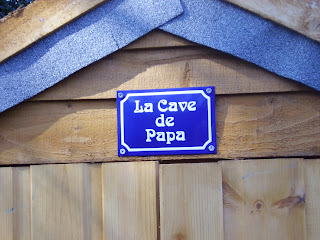 Posted by Gordon Mason at 8:21 pm No comments: